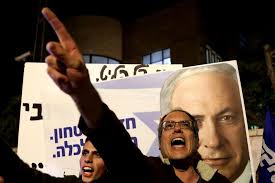 Netanyahu Charged with Bribery, Fraud and Breach of Trust

"The attorney general's decision on the prime minister was taken after a thorough examination of the numerous allegations raised by the prime minister's lawyers during the four days of the hearing in early October 2019," adding:

"All allegations were examined in depth as part of a regular work process deployed over many hours in which the State Attorney's Office submitted in-depth reviews of hundreds of pages, relating to the allegations raised at the hearing."

"After all claims were reviewed, it was found that there were no claims that arose at the hearing to change the offenses attributed to the prime minister…However, some of the claims have led to changes in the indictment, even if not a change in the offense clauses themselves."

Mandelblit stressed that Netanyahu "damaged the image of the public service and public trust in it (by abusing his office), knowingly "taking a bribe as a public servant in exchange for actions related to your position."

Last December, the State Prosecutor's Office recommended indicting him on two counts of bribery in so-called Cases 2000 and 4000.

He remains prime minister because his Likud party and Benny Gantz's Blue and White party failed to cobble together a majority 61-seat ruling coalition.

On Wednesday, President Rivlin called on Knesset speaker Yuli Edelstein to try forming what Netanyahu and Gantz failed to achieve — by December 11.

If unsuccessful, an unprecedented third election will be held within 90 days.

Israeli law only requires an indicted prime minister to step down if convicted. He's expected to seek parliamentary immunity, requiring legislation to get.

If new elections are held next year, what appears likely, he can stay in office and run for reelection while proceedings against him continue.

Israeli voters can settle his political status by defeating him and Likudniks if a third round of elections are held.

Given the slow pace of Israeli justice in cases like his with high-powered lawyers involved, it may be months before legal proceedings against him are concluded.

"Tonight we are witnessing an attempted government coup against the prime minister through blood libels and a biased investigation process (sic)," adding:

"I will not allow lies to win (sic). I will continue to lead this country, according to the letter of the law" he breached, according to serious charges against him.