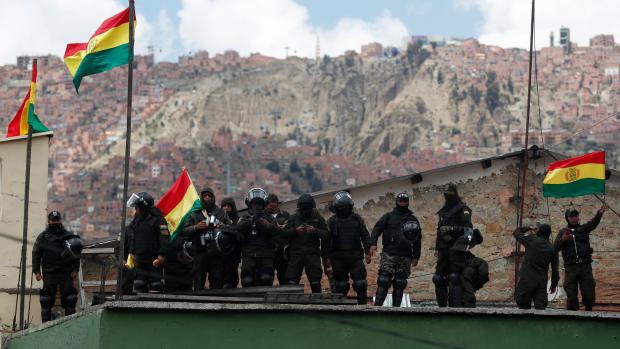 Pro-Morales Supporters in Bolivia Risk Arrest for Sedition or Subversion

The Trump regime's OK'd coup in Bolivia replaced democracy with fascist tyranny — political nobody putschist with no legitimacy Jeanine Anez installed as president.

Pro-Morales protests continue for his restoration to the office he democratically won for the fourth time last month.

Pro-regime security forces killed two dozen or more protesters, injured many others, and arrested hundreds for the "crime" of supporting legitimate governance over coup d'etat rule.

On Sunday, Anez announced the creation of a "special apparatus" to arrest pro-Morales Movement for Socialism (MAP) legislators and journalists involved in sedition or subversion — those unwilling to switch allegiance to the coup d'etat regime, no matter its illegitimacy.

What's happening is similar to events of September 11, 1973 and its aftermath in Chile.

Bodies of targeted individuals "were torn into pieces. "(T)heir eyes were gouged out with knives, their jaws broken, their legs broken."

"At the end, they gave them the coup de grace. They were merciless. The prisoners were killed so that they would die slowly."

"In other words, sometimes they shot them by parts. First, the legs, then the sexual organs, then the heart. In that order, the machine guns were fired."

Death squads killed thousands. Chile remains one of Latin America's most unequal societies, a model of economic unfairness — what's planned for Bolivia if popular rebellion isn't sustained to prevent it.

US-installed putschists aim to eliminate challengers to their repressive neoliberal agenda, arrests to begin against nonbelievers, how all fascist regimes operate.

Pro-Morales legislators hold most seats in parliament if able to keep them and continue supporting democratic rule.

Harsh crackdowns on protesters show what they're up against. Attorney at Harvard's International Human Rights Clinic Thomas Becker said 50 pro-democracy protesters in Bolivia he interviewed were unarmed.

From Mexico, he denounced regime "crimes against humanity," adding they "must not go unpunished."

From Bolivia, CodePink's Media Benjamin said she "came at the request of local activists, who are panicked about the situation in their country, afraid that things are spiraling out of control," adding:

Establishment media are ignoring their struggle for restoration of democratic rule, ignoring the coup d'etat regime's violent crackdown on activists for equity, justice and the rule of law.

Benjamin: "I am on the streets alongside thousands of Bolivians — despite the coup regime's violence — demanding the resignations of the coup regime and insisting on a return to democracy. However, the coup regime appears determined to hang onto power for as long as it can."

Anez appointed a hardline cabinet of anti-populist ministers straightaway. "I am proud to be among the crowds of indigenous people marching for their country," said Benjamin.

"A month ago, Bolivia was a stable country with a growing economy and decreasing poverty and inequality. Now, chaos and violence have gripped the country, as racism and religious discrimination are rearing their ugly heads."

"The indigenous Wiphala flag has been ripped off government buildings and uniforms, while the coup regime brags about the supremacy of Christianity and the Bible over the Pachamama (the Andean goddess representing mother earth) and calls sacred indigenous traditions 'satanic.' "

The fate of the nation and freedom of its people hang in the balance if coup authority prevails over the rule of law.