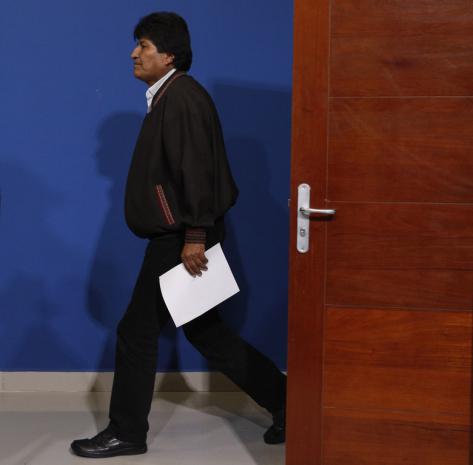 Morales Made Bolivia A Narco State?

Her hostile to peace, equity and justice propaganda pieces appear regularly in the Wall Street Journal — truth-telling banned in her columns, some of the worst establishment media rubbish featured exclusively.

Evo Morales was democratically elected and reelected Bolivian president four times. According to O'Grady disinformation, he "made Bolivia a narco state" — a US speciality, not how Morales operated.

According to the UN Office on Drugs and Crime (UNODC), coca bush growing in Bolivia under Morales "is well below the levels reached" before he took office in January 2006.

"It emphasizes the prevention and further expansion of illicit coca bush cultivation and the need to improve the living conditions of people in areas under such cultivation."

"Related activities" with Bolivian authorities continue working on "fight(ing) against drug trafficking and contribute to achieving the objectives of the National Alternative Development Plan."

In February 2019, Bolivia under Morales and UNODC "inaugurated port control to boost the fight against illicit drug trafficking," the UN agency reported.

Not according to O'Grady's disinformation. Falsely calling democrat Morales a "tyrant," she turned truth on its head claiming:

As president, he was involved with "one of the largest producers and distributors of cocaine in the Western hemisphere" — a bald-faced Big Lie, refuted by UNODC.

O'Grady: Morales "trampled the rights of the lowland indigenous people in the Amazon when they opposed the expansion of the coca business" — another bald-faced Big Lie, adding:

He "ruled Bolivia not as a social democrat (sic) but as an authoritarian (sic)…like Hugo Chavez in Venezuela and Daniel Ortega in Nicaragua (sic)."

Reality is polar opposite O'Grady's managed news misinformation and disinformation, yellow journalism at its worst, what no responsible editors would touch — rubbish Journal editors feature.

O'Grady: Morales "declared himself the winner" of elections held on October 20.

Fact: He legitimately defeated his leading rival by a double-digit margin.

O'Grady: "(O)n Nov. 10 the Organization of American States said its audit of the election results turned up evidence of fraud."

O'Grady: "Evo rose to power…under the cover of propaganda" — a US, NATO, Israeli specialty, an establishment media specialty, her specialty, not how Morales was elected and reelected four times.

The so-called "US war on drugs" abroad she touted doesn't exist. Since at least the early 1950s, the CIA trafficked in illicit drugs globally, notably heroin and cocaine — complicit with organized crime and money laundering Western banks.

O'Grady: "Morales led a boom in the Bolivian cocaine business. (He) made Bolivia into a full-blown narco state. (He's) one of the biggest capos in the Americas."

The US is the world's leading facilitator of the illicit drugs trade. It's active in Asia, Europe, the Middle East, South and Central America.

The US is one of numerous countries involved, the most harmful and disturbing because of its imperial power and global reach, influencing or affecting virtually everything worldwide.

The CIA relies on involvement in drugs trafficking for the significant amount of its revenues.

Heroin, cocaine, and other illicit drugs produce hundreds of billions of dollars in annual revenues – a US government-supported bonanza.

Pre-9/11, Afghanistan under Taliban rule eradicated 94% of opium production, according to UN estimates, one of various reasons why Bush/Cheney launched naked aggression on the country in October 2001.

Opium production skyrocketed. Afghanistan was transformed into the world's largest supplier – at one time producing more than total global demand, now accounting for at least most of it.

What O'Grady and other major media propagandists, masquerading as journalists, should report, they suppress — featuring state-approved disinformation, Big Lies and fake news instead.