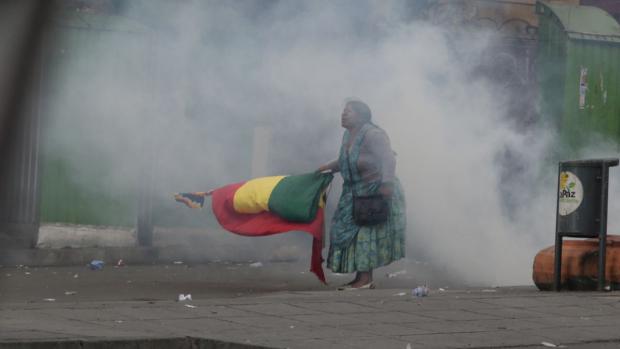 The Struggle for Bolivia's Soul

Disruptive events in Bolivia following the October 20 presidential election were made in the USA — a plot to replace democratically elected and reelected President Evo Morales with pro-Western puppet rule.

The country's military was co-opted to support fascism over freedom. Following the CIA coup script, an audit of election results by the US imperial tool Organization of American States (OAS) falsely claimed irregularities.

An independent analysis by the Center for Economic and Policy Research (CEPR) revealed "no evidence that irregularities or fraud affected the official result that gave President Evo Morales a first-round victory."

Bolivia's electoral process under him was open, free and fair. He was democratically reelected to a 4th term by a 10.57% margin — exceeding the 10% threshold required to avoid a runoff.

A week after the October 20 election, he explained that coup plotters wanted him denied the office he legitimately won — including dark forces in Washington, Bolivia's military,  police officials, trade union bosses, and the country's fascist opposition, wanting him ousted.

On November 10, he announced new elections, following the falsified OAS report. On the same day, he resigned to avoid blood in the streets — after losing support from Bolivia's military and police.

He left the country for Mexico over threats to his life. Key MAS officials stepped down for the same reason.

"It is highly concerning that during the political crisis (Bolivia) is facing, the government's readiness to search for constructive solutions through dialogue was swept away by developments reminiscent of a staged coup."

Morales supporters aren't going gently into that good night. Thousands rallied in La Paz and elsewhere for his return to the office he legitimately won.

Leaked audio recordings revealed that Bolivia's military chief Gen. Williams Kalliman and others in his chain of command were trained at the infamous School of the Americas — now called the Western Hemisphere Institute for Security Cooperation (WHINSEC) at Fort Benning, GA.

From Mexico, Morales tweeted: "Very grateful to Brother Manuel Lopez Obrador and the government and people of Mexico for saving my life. We arrived safe and sound with our brothers Alvaro and Gabriela," adding:

"The coup plotters offered $50,000 to a security member to deliver before my resignation."

Other dubious loyalists were also likely bribed to betray him. Violently disruptive post-election results were likely planned months in advance.

They're straight from the CIA's playbook. Aimilar actions happened numerous times before against sovereign independent governments targeted for regime change — coup d'etats to replace them with pro-Western puppet rule.

From Mexico, Morales denounced the OAS, stressing it operates "in the service of the North American empire," adding:

"(M)y great crime is to be indigenous. It's a class problem…We had big plans in the field of exports."

US and internal coup plotters "do not accept the nationalization of natural resources" — wanting them privately owned, profits going exclusively to privileged interests, ordinary people shut out from the country's wealth.

He vowed to return to Bolivia if supported by the country's people.

Trump regime hardliners, their congressional counterparts, and supportive media hailed Morales' ouster as democracy in action, a notion they abhor and tolerate nowhere — especially not at home.

The struggle for Bolivia's soul continues. Restoring freedom over fascism is what it's all about.