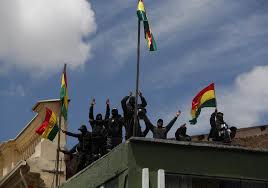 The CIA is an anti-democratic/anti-rule of law agency that's incompatible with peace, equity, and justice — notions it's sworn to oppose.

Dirty politicians, business officials, academics, labor bosses, major media, numerous reporters, US think tanks and other organizations, as well as elements from the clergy are complicit in its sinister activities.

It's responsible for mobilizing anti-Evo Morales mobs in Bolivia, orchestrating and directing their violence and vandalism, wanting the country returned to US client state status, its resources looted, its people exploited.

What happened since Morales was democratically reelected on October 20, defeating former president/US favorite Carlos Mesa by a double-digit margin, was planned weeks or months in advance.

The Grayzone explained that lead Bolivian coup plotter Luis Fernando Camacho, working in cahoots with the CIA against Morales, "is a far-right multi-millionaire…ultra-conservative Christian fundamentalist…who arose from fascist movements in the Santa Cruz region, where the US has encouraged separatism," adding:

Ahead of phony claims of electoral fraud, CIA-orchestrated street violence, and Bolivian military pressure on Morales to resign, "Camacho met with leaders from right-wing governments in the region to discuss their plans to destabilize Morales."

He heads the overtly fascist

Crucenista Youth Union, a paramilitary organization reminiscent of the Hitler Youth, manipulating the minds of hundreds of thousands of German youths, transforming them into NAZI party faithful — hostile to enemies of the state.

According to the Center for Economic and Policy Research (CEPR), "(s)tatistical analysis of election returns and tally sheets from Bolivia's October 20 elections shows no evidence that irregularities or fraud affected the official result that gave President Evo Morales a first-round victory," adding:

"Contrary to a post-election narrative that was supported, without evidence, by the OAS Electoral Observation Mission, statistical analysis shows that it was predictable that Morales would obtain a first-round win…"

CEPR senior policy analyst Guillaume Long explained that "(t)here is simply no statistical or evidentiary basis to dispute the vote count results showing that Evo Morales won in the first round," adding:

"In the end, the official count, which is legally binding and completely transparent, with the tally sheets available online, closely matched the rapid count results."

According to CEPR co-director Mark Weisbrot, "(t)he OAS press statement of October 21 and its preliminary report on the Bolivian elections raise disturbing questions about the organization's commitment to impartial, professional, electoral observation," adding:

"The OAS should investigate to find out how such statements, which may have contributed to political conflict in Bolivia, were made without any evidence whatsoever."

The Washington-based OAS is a US imperial tool, its Bolivian election audit results falsified to serve its interests.

CEPR noted that "an OAS electoral mission overturned election results in Haiti in 2011 with no statistical or other basis for doing so."

Morales was Bolivia's first ever indigenous president, maintaining popular support throughout his tenure since January 2006.

Despite pursuing what James Petras called "orthodox economic policies ?right out of the handbook of the international financial organizations," he opposed US imperialism.

He supported regional independence and integration, achieved impressive economic growth from 4 - 6% annually, and reduced poverty by over 40%.

Employment and wages rose on his watch. He nationalized energy, telecommunications, and other industries, raising state revenues, used for infrastructure projects and social programs.

According to UNESCO, his literacy program, following the Cuban model, virtually eliminated illiteracy in the country.

At the same time, his pro-business agenda served the interests of oil, gas and mining industries, the state benefitting as well, Morales earlier saying:

On October 17, a CEPR report on Bolivia under Morales said he reduced poverty by 42%, extreme poverty by 60% since taking office in January 2006, Mark Weisbrot saying:

"Bolivia has shown that it is possible for a small, poor country in South America to make substantial economic and social progress, with macroeconomic stability, solid income growth and redistribution, through a mix of state-led, heterodox economic policies, and markets."

By 2018, the country's GDP increased by 50% over its 2005 level, Latin America's highest growth rate — in contrast to sharp regional slowdowns or declines since 2014.

Unemployment declined sharply to 4.4%, remaining at that level through 2018.

Its public debt under Morales was maintained at a level considered manageable.

Though governance under his leadership served "orthodox economic policies," Bolivians benefitted in ways not achieved under his predecessors.

It's why voters reelected him to a fourth consecutive term last month, supporting him strongly over dirty business as usual rule they oppose.