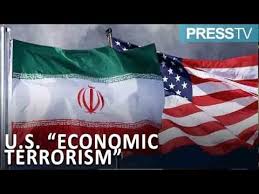 A shameful Journal commentary called for "Trump (to) do even more on Iran," falsely saying:

"The US has the legal authority to reimpose international sanctions unilaterally."

No such authority exists. According to the UN Charter, Security Council members alone may legally impose sanctions on member states, not individual nations on their own for any reasons.

When this action is taken, sanctions have no legal validity. Countries going along with illegal sanctions are complicit in criminality.

The US weaponizes sanctions to wage war by other means against nations unwilling to bend to its will. Virtually always they're unjustifiably justified by Big Lies and deception.

The Journal lied claiming Iran "violat(ed) its nuclear commitments and attack(ed) its neighbors." Reality is polar opposite.

The broadsheet falsely accused Tehran of "significant non-performance of (its JCPOA) commitments…" Iran is fully compliant, affirmed by IAEA inspectors.

The Journal ignored the Trump regime's flagrant breach of international law by abandoning the agreement — unanimously affirmed by Security Council members, including the US.

It was silent about Europe's JCPOA breach, failing to fulfill its mandated obligations, supporting Trump regime lawlessness by its actions, while pretending otherwise.

No legal procedure permits imposition of nuclear related or other sanctions on Iran by the US or other countries unilaterally.

Sino-Russian Security Council veto power closes this option for the Trump regime to seek legitimacy for its flagrantly illegal actions.

Claiming otherwise, the Journal's argument fell flat. Most important is how Iran's fundamental rights are undermined by US war by other means on the country and its people.

Actions taken by the Trump regime on Iran, Venezuela, and nations victimized by endless aggression are Nuremberg-level high crimes.

Convicted Nazi war criminals were hanged. Modern day US ones are free to smash, rape, and plunder targeted nations with impunity — establishment media supporting their rapaciousness.