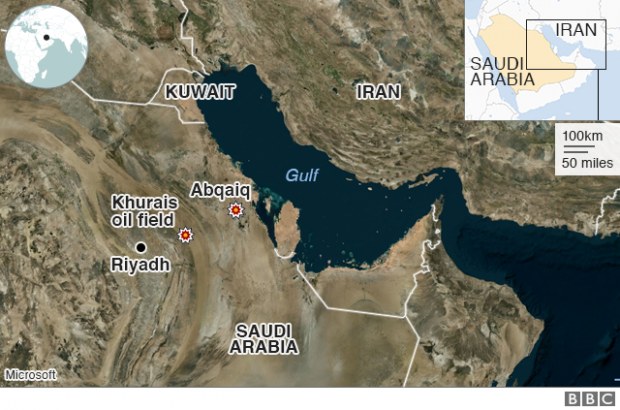 A pattern followed by aggressor regimes like the US, its key NATO allies, Israel, the Saudis, and their rogue allies is if at first you're not believed, lie, lie again.

He offered no credible evidence supporting the phony accusation by a despotic regime notorious for serial lying.

He displayed alleged wreckage from drones and cruise missiles that could have been from anything, proving nothing.

Urging other nations to "acknowledge Iran's (nonexistent) malign activities in the region," he was silent about years of Saudi terror-bombing of Yemeni residential areas, schools, hospitals, marketplaces, food storage facilities, and other civilian sites, massacring countless thousands of defenseless civilians.

He ignored kingdom opposition to peace, equity and justice, its support for ISIS and likeminded jihadists, partnering in US regional wars of aggression, saying nothing about egregious state-sponsored human rights abuses — including torture and cold-blooded mass murder.

"This attack wasn't against Saudi Aramco or Saudi Arabia. It was against the international community" — another bald-faced Big Lie.

The NYT reported that the Trump regime "said Iran was most likely behind the attacks on Saudi Arabian oil facilities on Saturday, citing (phony) intelligence assessments and satellite photographs showing what officials said was evidence of Iranian involvement," adding:

"The sophistication of the attack far exceeds that shown in previous attacks by the Houthis, raising the likelihood of direct Iranian involvement."

It's hard imagining what's left to sanction other than on Iranian officials not already illegally sanctioned.

Hostility toward Iran is all about its unwillingness to subordinate its sovereign rights to US interests, along with its opposition to imperial wars and support for Palestinian rights.

All nations Washington doesn't control are on its target list for regime change — notably Russia, China and Iran.

It's why unthinkable nuclear war remains an ominous possibility by accident or design.

I rarely watch films but saw part of Stanley Kramer's disquieting 1959 film "On the Beach" this week.

Rarely ever shown on television, I saw it in full long ago, a film everyone should see, portraying the aftermath of nuclear war — ending life on earth, a frightening scenario if the fictional account becomes real.

The plot involves a US submarine crew returning home finding no signs of life. The final scenes are especially chilling, showing earlier life in an Australian community, its nation last to experience fatal nuclear radiation fallout.

The film ends with unnerving silence, no visible signs of life, once bustling streets now empty.

The film's clear message is abandon all hope if nuclear war is waged.

We're all doomed to die painfully if things turn out this way – the supreme price of imperial arrogance.