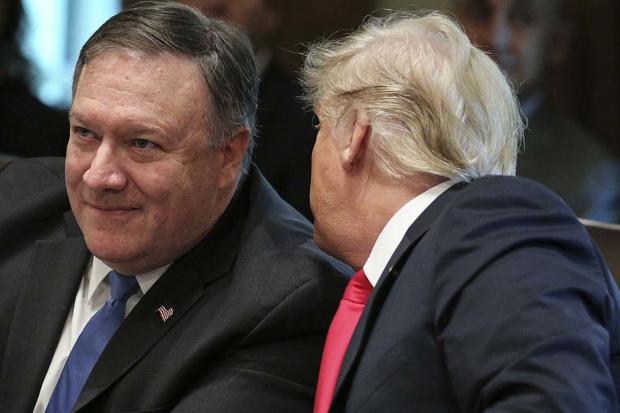 Pompeo and Bolton are ideological extremists – contemptuous of rule of law principles and democratic values, supporting fascist tyranny at home and abroad.

Given the power of their positions, their psychopathic rage threatens world peace and stability.

Deranged and indifferent to the rights and welfare of others, they're pathological liars, manipulative con men monsters, blaming others for US high crimes they support.

On Tuesday, Pompeo took his anti-Iran rage to the Security Council. He falsely said "(w)e helped dismantle ISIS's physical caliphate, and we continue to work with (US imperial partners) in the defeat ISIS coalition to help the region recover from that menace."

Fact: The US created and supports ISIS, al-Qaeda, its al-Nusra offshoot, and other terrorist groups, using them as proxy fighters, supported by Pentagon-terror-bombing.

Pompeo lied claiming the Trump regime aims to "bring peace to Yemen" — the second longest US war of aggression in modern times, begun by Bush/Cheney weeks after their preemptive war on Afghanistan based on Big Lies, the same true for all US wars.

Pompeo lied again, claiming the Trump regime and its imperial allies aim to "improve the lives of the Palestinians."

The US and West have been indifferent toward them since the infamous 1917 Balfour Declaration, calling for a Jewish state, established on stolen Palestinian land, responsible for endless conflict, occupation, dispossession, and repression by ruthless Israeli regimes.

For months, the Trump regime has been pressuring and bullying other countries to join an anti-Iran Persian Gulf coalition on the phony pretext of protecting international shipping through the Hormuz Strait chokepoint.

The only freedom of navigation threats come from the hostile presence of US military forces and their imperial partners in high crimes of war and against humanity.

So far the Pompeo/Bolton scheme flopped, amounting to a coalition of one — with token support alone from Britain, Israel, and Australia.

The vast majority of world community nations wants no part of it because it has nothing to do with "protect(ing) freedom of the seas," one of many Pompeo Big Lies.

Citing "challenges facing the region," he ignored US responsibility for what's going on from its endless wars of aggression against nonbelligerent nations threatening no one.

He and Bolton are pushing things toward war with Iran, likely what their Persian Gulf scheme is all about, aiming to create provocations for conflict, why the world community opposes it.

Their anti-Iran venom is punctuated with a litany of bald-faced Big Lies.

Pompeo: "(T)he Islamic Republic of Iran and its proxies continue to foment terror and unrest in Iraq, Lebanon, Syria, and Yemen with devastating humanitarian consequences (sic)."

Polar opposite is true about the region's leading peace and stability proponent. It's precisely true about the US, NATO, Israel, and their rogue partners.

Pompeo lied claiming Iran is conducting "a campaign of extortion diplomacy" — a US specialty, not how Tehran operates.

He falsely accused Iran of breaching its JCPOA obligations — what the Trump regime did by withdrawing from a Security Council affirmed international agreement, making it binding international and US constitutional law.

He lied claiming Iran "continues to threaten further expansions of its nuclear program in defiance of its international commitments."

He lied about IRGC actions against vessels it interdicted in the Persian Gulf — because of their provocative maritime law breaches, he ignored.

Iran is in full compliance with all Security Council resolutions and its nuclear obligations. The US is a serial scofflaw on countless issues, mainly its endless wars of aggression and global war OF terror, not on it, accountability never forthcoming.

The two-headed/pathological Pompeo/Bolton monster in charge of the Trump regime's geopolitical agenda threatens everyone everywhere.