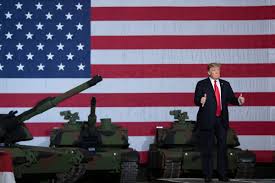 Endless US War on Iran by Other Means

Forty years of US war on the Islamic Republic by other means is all about wanting to replace its ruling authorities with pro-Western puppet rule — along with gaining control over its vast oil and gas resources, and eliminate Israel's main regional rival.

Trump regime policies toward Iran exceed the viciousness of its predecessors. They risk turning war by other means into something hot — against a nonbelligerent nation able to hit back hard against aggressors.

Most world community nations maintain diplomatic relations with Tehran. They oppose Trump regime toughness, refusing to ally with its unacceptable Gulf mission, hostile to its sovereignty.

Its aim to establish an anti-Iran Persian Gulf coalition is more one of the unwilling than willing, Britain and Israel alone offering token involvement.

According to Russia's Nezavisimaya Gazeta, Iran warned the Netanyahu regime against involvement in Trump's hostile Persian Gulf mission, saying it will sink Israeli vessels that enter the Hormuz Strait, posing an obvious threat to its security.

According to military expert Yuri Lyamin, "the defiant emergence of Israeli vessels near Iran's territorial waters will inevitably raise tensions in the Persian Gulf region and chances are that armed incidents could flare up, given the hostile relations between Israel and Iran."

Hostile US and UK warships in the Gulf on a mission of mischief could spark confrontation with Tehran.

Its Foreign Ministry spokesman Abbas Mousavi said involvement of Israeli vessels in the Gulf is "an obvious infringement on Iran's security and sovereignty," adding:

"Iran has historic responsibility for protecting the Persian Gulf. We consider it as part of our territory and believe that the presence of foreign forces there is unacceptable." That especially applies to US and UK ones.

Their presence near Iranian waters "will be considered as a major threat to (its) national security."

Separately on Wednesday, UK media reported that Iran's Grace 1 super-tanker (seized by Britain on July 4 at the behest of the Trump regime, an act of maritime piracy) was to be released on Thursday.

Gibraltar's Chief Minister Fabian Picardo, where the vessel is being held, indicated he would not renew the order to detain Grace 1, saying "you can expect to see her on her way tomorrow (August 15)."

On Thursday, Iran's Press TV reported that the Trump regime "applied to seize" the tanker, a statement by Gibraltar authorities saying:

"The US Department of Justice has applied to seize the Grace 1 on a number of allegations which are now being considered. (The) matter will return to the Supreme Court of Gibraltar at 4:00PM" local time Thursday.

Its chief justice Anthony Dudley said "the ship would have sailed" if the Trump regime hadn't requested otherwise. Its illegally detained captain and crew were released.

Iranian Deputy Foreign Minister Seyed Abbas Araghchi said any aggression on the country will be responded to harshly and quickly.

Its naval commander Admiral Hossein Khanzadi warned vessels of hostile nations to leave the Gulf or face a "humiliating pullout."