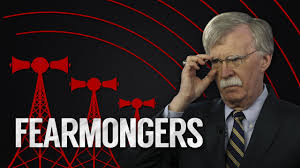 US State Terror Against Nonbelligerent Iran

The US under both extremist right wings of its war party is an unparalleled menace to world peace, stability and security.

Its rage to rule the world unchallenged threatens everyone everywhere, including the vast majority of Americans, suffering from exploitive practices.

Since 1979, the US targeted sovereign independent Iran for for regime change — notably to gain control over its vast oil and gas resources, along with wanting Israel's main regional rival eliminated.

Trump regime hostility toward Iran exceeds the viciousness of its predecessors — psychopathologically challenged DJT, Bolton, Pompeo, and their henchmen.

A previous article explained that over 60,000 mental health professionals signed a Duty to Warn petition, stating the following:

"We, the undersigned mental health professionals, believe in our professional judgment that Donald Trump manifests a serious mental illness that renders him psychologically incapable of competently discharging the duties of President of the United States."

"And we respectfully request he be removed from office, according to article 4 of the 25th amendment to the Constitution, which states that the president will be replaced if he is 'unable to discharge the powers and duties of his office.' "

The same goes for his menacing to humanity geopolitical team, notably Bolton and Pompeo, favoring brute force in pursuing US global aims.

In his latest remarks, Pompeo continued on the warpath against the Islamic Republic, showing frustration for failing to enlist Persian Gulf coalition partners against the country — other than token support from Britain and Israel.

On Sunday via Twitter, he urged US imperial "allies and partners" to escalate pressure on Iran, falsely accusing its ruling authorities of "destabilizing behavior" — a US, NATO, Israeli specialty, not how Tehran operates.

The State Department repeated the long ago discredited Big Lie about Iran, falsely calling the country "the world's leading state sponsor of terror" — what far and away applies to the US, featuring state terror worldwide as official policy.

Hostile Trump regime actions toward Iran are all about seeking regime change, including why it abandoned the landmark JCPOA agreement, killing it as things now stand, European countries going along by failing to fulfill their mandated obligations — operating as a collective US colony like they most often do.

Its "hostile acts against Iran…will have (no) impact other than (regional) insecurity."

The US is responsible for regional threats by "pouring weapons" into the Middle East, he stressed.

Its agenda toward Iran combines state terror and "economic warfare." Zarif believes that hostile to peace and stability US policies are counterproductive, Washington "getting more and more isolated."

It's "violating the law…breaking (international) law." Its ruling authorities are the source of instability globally, and "this type of behavior (causes) global disorder. (It's) dangerous for everybody and everybody is realizing that."

Iran is a nonbelligerent state, polar opposite how the US, NATO and Israel operate.

He's concerned about possible US aggression. "But as a diplomat, I always need to look for a peaceful way out. And that's what we are trying" to do, he stressed.

Meeting with Russian Prime Minister Dmitry Medvedev, both officials called for increasing bilateral economic cooperation, including by bypassing the dollar in trade relations.

Bilateral ties will be discussed further when Vladimir Putin and Iranian President Hassan Rouhani meet Wednesday in Sochi, Russia on the sidelines of a Russia/Iran/Azerbaijan summit on trilateral cooperation.

Security in the Gulf region "should be universal and comprehensive…based on respect for the interests of all regional and other parties in the world," adding:

"We would see to establish a kind of an Action Group to prepare an International Conference on security and cooperation in the Gulf area."

Universal respect for international law is key. Russia is willing to work with all nations in pursuing these goals.

Polyanskiy stressed that only Security Council adopted measures are acceptable. Key for Russia is respecting the sovereign rights and territorial integrity of all nations, along with going all-out to resolve issues diplomatically.

Given US imperial aims, diplomacy is a waste of time with its officials — time and again breaching agreements and the rule of law to get their way.