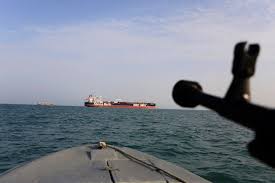 Iran to Defend its Interests in Persian Gulf

Hegemon USA considers waters worldwide its own, the mindset of its hostile to peace and stability imperial regimes, menacing everyone everywhere.

Iran reminds its hardliners that the Persian Gulf bordering its territory and seven Arab countries isn't the American gulf, a reality that doesn't go down well with its dark forces, seeking dominance over other nations worldwide.

The Trump regime's aim to enlist anti-Iran partners in the Gulf turned out to be more a coalition of the unwilling than the other way around, the world community wanting nothing to do with its hostile mission.

Britain and Israel alone offered token support to a de facto US coalition of one that has nothing to do with maritime security, everything to do with heightening regional tensions more than already — risking US war by other means on Iran turning hot.

"If Israel enters the Strait of Hormuz, it will be engulfed in the wrath of the region and its smoke will rise from Tel Aviv," adding:

"Iran has a vital role in the security of the Strait of Hormuz. Any US-led military coalition in the strait is a repetition of Iraq and Afghanistan occupation and escalation of insecurity in the region."

The Islamic Republic justifiably considers the presence of hostile foreign forces near its territory a "clear threat" to its security.

Foreign Ministry spokesman Abbas Mousavi said "(w)ithin the framework of the country's deterrence and defensive policy, the Islamic Republic of Iran reserves the right to counter this threat and defend its territory."

The Netanyahu regime's foreign minister Israel Katz said Israel will aid the US presence in the Gulf by providing intelligence and "unspecified fields," what it does anyway, apparently no IDF vessels to be involved near Iranian waters.

Last week, Netanyahu falsely claimed "we witnessed a sharp clash with Iran's satellites who tried to sabotage international shipping in the Straits at the mouth of the Red Sea" — a bald-faced Big Lie, adding:

"If Iran tries to block the Straits of Bab al-Mandab, it will find itself facing an international coalition determined to prevent it from doing so, and this coalition will also include the State of Israel and all its arms."

"(T)he Israeli military is ready to respond simultaneously on two fronts, and also on the Red Sea. Only in that case we would be less selective and the harm to our enemies would be greater."

The Bab al-Mandab Strait between southwest Yemen, Djibouti and Eritrea near the Horn of Africa connects the Red Sea and Gulf of Aden to the Arabian Sea and Indian Ocean through which millions of barrels of oil pass daily – matching the Suez Canal in importance.

It's over 1,100 miles south of the Persian Gulf, far distant from Iranian waters. Tehran prioritizes keeping regional waters and their strategic chokepoints secure for maritime traffic.

The US, NATO, Israeli presence in these waters threaten it. Responding to a hostile Pentagon mission near its territory, Iranian Foreign Minister Zarif tweeted the following:

"Persian Gulf is vital lifeline and thus nat'l…security priority for Iran, which has long ensured maritime security. Mindful of this reality, any extra-regional presence is by definition source of insecurity — despite (US) propaganda."

Separately on Saturday, Zarif said "American pressure on Iran is due to Iran's power and might and not weakness. The US is worried about its defeat in the field of diplomacy."

Iranian Defense Minister General Amir Hatami warned that an Israeli presence in the Gulf would be "highly provocative and could have disastrous consequences for the region."

Iran is a nonbelligerent nation threatening no one. If preemptively attacked, it's able to hit back hard against an aggressor.

Hotheads Pompeo, Bolton, and their henchmen favor war on the Islamic Republic. Cool heads in Washington want no part of attacking the country — knowing there's a stiff price to pay for going this far.