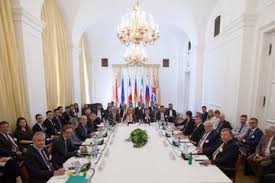 Since adoption of the JCPOA nuclear deal in 2015, effective January 2016, Iran fully complied with its obligations.

Obama breached the agreement straightaway by imposing illegal sanctions on Iran. So did Congress in December 2016 by near-unanimously renewing the hostile Iran Sanctions Act, effective through 2026.

At the time, an unnamed senior Obama regime official lied, saying "we do not believe (an extension) violat(es) the nuclear agreement with Iran…"

Tehran justifiably called it a flagrant breach. The same holds for unilaterally imposed congressional and White House sanctions on any countries, an exclusive Security Council prerogative.

In May 2018, the Trump regime illegally withdrew from the JCPOA, followed by multiple rounds of illegal sanctions aimed at harming Iran's economy and imposing misery on its people.

Iran should be calling an emergency IAEA meeting over US and Europe's breach of their JCPOA obligations, not the other way around.

Trump regime hardliners ignored what the IAEA calls the "world's most robust nuclear verification" of any nation's nuclear-related activities, Iran fulfilling its JCPOA obligations, breached by the US and Europe.

Wolcott lied claiming the US "strongly supports the IAEA and its verification efforts in Iran." No matter how thorough, it's not good enough for US hardliners — while ignoring nuclear armed and dangerous Israel, a nation refusing to sign or comply with the Nuclear Non-Proliferation Treaty.

In response to Iran increasing its uranium enrichment beyond the JCPOA-permitted 300 kg/3.67 level, its legal right under Articles 26 and 36 because of the Western breach, an IAEA meeting will be held on July 10 to discuss the issue.

On Sunday, Iran said it began enriching uranium beyond the 3.67% level because Europe remains in breach of its JCPOA obligations — supporting Trump regime sanctions instead of splitting with the White House on this issue, showing neither Europe or the US can be trusted.

Earlier Iran said it needs a 5% level for its Bushehr Nuclear Power Plant and a 20% level for its Tehran research reactor, its legal NPT and JCPOA right.

It's mandated to promote peaceful nuclear energy uses, oppose their use for military purposes, and monitor activities of nations with nuclear programs if permitted by their authorities.

Not all its 171 member-states permit monitoring. The US and Israel are IAEA members but don't let its monitors near its sensitive nuclear weapons operations.

A member since 1958, the Islamic Republic fully cooperates with IAEA inspectors, 15 times certifying Iran's fulfillment of its JCPOA obligations.

In response to the Trump regime's request for an IAEA meeting on Iran, its envoy to the organization Kazem Gharibabadi said the following:

"It is indeed a sad irony that the same regime which materially violated the JCPOA by withdrawing illegally and unilaterally form the deal, and has been pushing others to follow suit, thereby hampering its implementation by the International Community through exerting every means of coercion, is expressing concern over the mere implementation of the same deal," adding:

"Iran's recent decisions, which are exercised in response to the situation caused by the US by imposing sanctions on all who want to implement their commitments to the JCPOA, tend to bring about the lost balance of the deal and are fully in line with its provisions."

"The fact that the US as the prime violator of the JCPOA, has tabled this request, indicates its isolation in contradicting multilateralism and rule of law in international affairs."

"Furthermore, the recent developments have no connection to safeguards related issues and the mandate of the Board of Governors. Issues related to the implementation of the JCPOA will be deliberated in its prescribed mechanisms."

Iranian Deputy Foreign Minister Araqchi said "(t)oday (Sunday) is the last day of the 60-day opportunity given to the Europeans and since Iran has not gained what it expects from its JCPOA commitments, it is to start the second phase of reducing its commitments" — as permitted by Articles 26 and 36.

The US, NATO, and Israel are serial rule of law violators, Iran a complier with its legal obligations.

Most important, Iran supports world peace, stability, and cooperation with other nations, threatening none.

US-led Western/Israeli standards are polar opposite. They menace what all just societies hold dear.

The White House under his leadership is "dysfunctional," noting that his tenure could end in "disgrace and downfall."

He doesn't think Trump's White House will "ever look competent." Reports of "vicious (regime) infighting and chaos (are) mostly true."

On Trump's hostile agenda toward Iran, Darroch reportedly said "(i)ts unlikely that US policy on (Tehran) is going to become more coherent any time soon. This is a divided Administration."

It remains to be seen how Darroch's remarks may affect White House relations with Britain short-term and whether he'll remain its envoy to the US once a new prime minister is chosen.