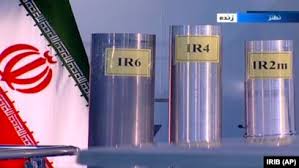 The Nuclear Non-Proliferation Treaty (NPT) was adopted to step back from the brink of catastrophic nuclear war if waged.

Since adopted in 1970, it sought to halt the proliferation of these weapons — while supporting the non-military use of this technology.

It bans all UN member states from developing and producing nuclear weapons except for Britain, China, France, Russia and the US — while committing these five nations to eventually eliminate their arsenals.

It's clearly not happening with the US under Obama and Trump committed to spending more than $1 trillion over the next 30 years, enhancing its arsenal, making humanity less safe from the threat of war with these weapons.

NPT's Article IV states: "Nothing in this Treaty shall be interpreted as affecting the inalienable right of all the Parties to the Treaty to develop research, production and use of nuclear energy for peaceful purposes without discrimination and in conformity with Articles I and II of this Treaty."

NPT considers uranium enrichment for peaceful purposes the right of all nations, no limit placed on it as long as non-military development alone is pursued.

Yet the US-led West demands Iran alone among world community nations be denied its legal NPT right to pursue legitimate non-military nuclear development — a nonbelligerent nation, at peace with its neighbors, threatening none, never an aggressor.

JCPOA provisions permit Iran to increase uranium enrichment for peaceful purposes beyond levels agreed on if other signatories fail to fulfill their obligations under the agreement.

That's precisely what happened by Trump's illegal withdrawal, along with breach of the agreement by Britain, France, Germany and the EU.

"(I)n order for us to be able to make use of uranium at (the) Bushehr reactor, a 5% purity is needed, and it is a totally peaceful purpose that we generate power from the reactor jointly built by Iran and Russia," adding:

Under the JCPOA, Iran is legally allowed to take this step because the agreement's Western signatories breached their legal obligations.

"We definitely won't initiate any move, unless the other side makes it first. So far…the Americans have violated the JCPOA directly and the Europeans have done so indirectly. So we will show reaction exactly proportional to the extent of their breach of the deal," Velayati explained.

Days earlier, Iranian Foreign Minister Zarif tweeted: The Islamic Republic "is committed to the full implementation of the #JCPOA: as long as E3/EU implement THEIR economic commitments."

"So moving forward, Iran will comply with its commitments under the JCPOA in exactly the same manner as the EU/E3 have—and will—comply with theirs."

The agreement is only binding if its other signatories fulfill their obligations. Trump's illegal pullout followed by Europe's breach, partnering with US hostility against Iran, effectively rendered the JCPOA null and void unless European countries reverse their position and come into compliance with its provisions.

The US/European double standard is glaring, demanding Iran fulfill its JCPOA obligations, while they afford themselves the right to breach them unaccountably.

Abandoning the Security Council-adopted JCPOA, making it binding international law, is one of countless examples of Western civilization's deplorable state.

The West is comprised of fantasy democracies, contemptuous of the rule of law and public welfare, waging endless wars for domination over other nations.

They arrogantly pursue toughness against Iran and other sovereign independent countries threatening no one. The US demands they bend to its will, non-compliers targeted for regime change.

On Wednesday, Iran's President Hassan Rouhani said "(i)f the nuclear agreement is a bad deal (as Trump claims), then what is this fuss about when Iran (legally) wants to reduce its commitment," adding:

"If the agreement is a good deal, then why can the US and European countries abandon their commitments and only Iran should meet its commitments."

That cuts to the core of the issue, along with Europe's support for illegal Trump regime nuclear-related sanctions by observing them.

Iranian pursued policies are legal  under the JCPOA and NPT. Consider the irony.

Iran is criticized by the US and Europe despite its lawful actions while the West considers it OK to operate extrajudicially on the world stage.

These countries long ago abandoned the rule of law in pursuing their interests — at the expense of countless other nations harmed by their policies.