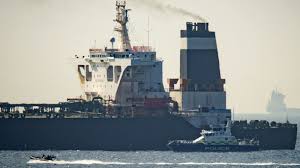 Throughout the post-WW II era, Britain has been and continues to be an appendage of US imperial policy — taking orders, saluting and obeying.

Under the UN Convention on the Law of the Sea (UNCLOS), piracy is defined as follows:

"(a) any illegal acts of violence or detention, or any act of depredation, committed for private ends by the crew or the passengers of a private ship or a private aircraft, and directed:

(ii) against a ship, aircraft, persons or property in a place outside the jurisdiction of any State;

(b) any act of voluntary participation in the operation of a ship or of an aircraft with knowledge of facts making it a pirate ship or aircraft;

(c) any act of inciting or of intentionally facilitating an act described in subparagraph (a) or (b)."

UNCLOS mandates that all nations are obligated to act against pirate actions. They have universal jurisdiction on the high seas to seize pirated vessels, arrest responsible parties, and detain them for prosecution.

On Thursday, around 30 UK marines and Gibraltar police committed piracy by illegally boarding and impounding Iran's Grace 1 supertanker, the Panama-flagged vessel owned by a Singaporean company, the incident happening off the Gibraltar coast in international waters.

Macaire reportedly said the vessel was seized to enforce sanctions against Syria. Reportedly it was carrying fuel and oil bound for the country, Iran's legal right to send it.

Iranian Foreign Ministry spokesman Abbas Moussavi said Tehran told Macaire that sanctions on Syria "are not based on Security Council" resolutions and have no legal validity.

Moussavi also said Spain's Foreign Ministry confirmed that the vessel's seizure came following a Trump regime request — based on "extraterritorial sanctions despite the fact that the European Union has invariably been against such bans."

Spain doesn't recognize Gibraltar and its waters as UK territory, the seizure affecting its sovereignty.

"America & our allies will continue to prevent…Tehran & Damascus from profiting off this illicit trade (sic)."

There's nothing "illicit" about legitimate bilateral trade relations. Hostile US/UK actions against Iran, Syria, and other countries are flagrantly illegal.

On Friday, Iranian General Mohsen Rezaei, serving also as the country's Expediency Council secretary, warned that if Britain "does not release the Iranian oil tanker, it is the authorities' duty to make a reciprocal move and seize a British oil tanker."

The Islamic Republic never initiated hostile actions against another nation throughout its 40-year history, but reserves the right to respond appropriately to unlawful actions against the country.

The US and Britain are partnered against world peace, stability, and the rule of law, as well as against Syrian Arab Republic and Islamic Republic sovereign rights.

They're provoking the Iran to respond to their hostility in a way that pushes things toward war.

Whatever actions Iranian authorities take no doubt will be lawful under international law.

When high seas piracy occurs, the aggrieved party is entitled to seek redress — including return of the property in question or full compensation for the loss.

Iran no doubt will act appropriately in response to Britain's maritime piracy against its supertanker.

If redress is sought in the International Court of Justice (ICJ), the Hague-based World Court, its justices most likely would support Iran's case though it's by no means certain.

The Convention for the Suppression of Unlawful Acts Against the Safety of Maritime Navigation (the SUA Convention) is the other main international law dealing with piracy.

While UNCLOS defines piracy, it doesn't include an enforcement mechanism. Aggrieved nations must use their domestic and international law to make their case in an international tribunal.

Far more important than the seizure of an Iranian vessel and its disposition is whether rage for war against the country by Trump regime hardliners can be prevented.

"(W)e are convinced that this step contradicts the commitment, declared by the leading EU states, including the United Kingdom, to preserve the nuclear agreements with Iran," adding:

"We consider detaining the vessel and its cargo a deliberate action to further aggravate the situation around Iran and Syria."

"Exuberant comments by high-ranking UK and US officials that followed immediately after this operation prove that this action was prepared in advance and with the involvement of the relevant agencies and services of certain states."

Both nations operate in cahoots against governments on the US target list for regime change — why Britain breached the JCPOA after Trump pulled out.

France, Germany, and the EU operate the same way — as virtual US colonies on most issues, subordinating their sovereignty to its interests.