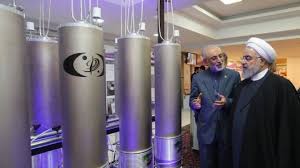 Increasing Uranium Enrichment Not to Develop an Iranian Nuke

"(W)e have said very clearly what we are doing and consider this as part of our rights as per the JCPOA."

The following day, President Rouhani said on July 7, "our enrichment level will no longer be 3.67%. We will set this commitment aside."

Beginning on Sunday, uranium enrichment will increase to "any amount that we want," he added — a diplomatic move, not a hostile or illegal one.

JCPOA Article 26 states: "The US   Administration, acting consistent with the respective roles of the President and the Congress, will refrain from imposing new nuclear-related sanctions. Iran has stated that it will treat such a re-introduction or re-imposition of the sanctions specified in Annex II, or such an imposition of new nuclear-related sanctions, as grounds to cease performing its commitments under this JCPOA in whole or in part" — its legal right.

The same obligation holds for Britain, France, Germany and the EU. They're bound by JCPOA provisions.

The agreement's Article 36 states: If European actions "constitute significant non- performance, then (Iran) could treat the unresolved issue as grounds to cease performing its commitments under this JCPOA in whole or in part and/or notify the UN Security Council that it believes the issue constitutes significant non-performance."

The JCPOA nuclear deal only matters if observed by its signatories and world community — clearly not the case.

If Europe doesn't change its policy, the agreement is likely doomed. More ominously, the risk of US aggression on Iran is greater, what Trump regime hardliners want, inventing pretexts to get their way.

"Iran has just issued a New Warning. Rouhani says that they will Enrich Uranium to 'any amount we want' if there is no new Nuclear Deal. Be careful with the threats, Iran. They can come back to bite you like nobody has been bitten before!"

Tehran will also restart construction of its Arak heavy water research reactor, its legitimate right, relinquished as a concession to reach agreement on the JCPOA nuclear deal.

It hasn't produced or tested natural uranium pellets, fuel pins or assemblies designed for the reactor, what it's legally entitled to do ahead.

It may choose to pursue all Nuclear Non-Proliferation Treaty permitted actions because of Europe's betrayal — while allowing uninterrupted IAEA access to its nuclear facilities.

Rouhani's "advice to Europe and the US is to return to logic, return to the negotiation table, return to understanding, mutual respect, and we all implement the JCPOA under this condition."

The US, Britain, France, Germany, and the EU demand Iran fulfill its JCPOA obligations despite their flagrant breaches of the agreement — a double standard Tehran rejects.

In mid-June, Pompeo lied accusing Iran of links to al-Qaeda — created and supported by the US, along with ISIS and other terrorist groups, ones Tehran strongly opposes.

Pompeo and Bolton falsely claim the US has the right to attack Iran militarily — what international law clearly prohibits except in self-defense.

Ahead of Trump's militarized 4th of July spectacle in Washington, a manned US spy plane provocatively entered Iranian airspace, daring the IRGC to down it, Tehran's legal right it chose not to invoke.

In late June, Trump threatened to "obliterat(e)" Iran if its forces attack "anything American." US casualties would constitute the most likely convenient pretext  White House hardliners seek for war on the country, especially when followed by screaming anti-Iran establishment media headlines.

They're consistently hostile toward nations on the US target list for regime change, supporting its illegal sanctions and hot wars, instead of responsibly denouncing them.

Separately, Iran's Intelligence Minister Mahmoud Alavi said "(h)olding talks with America can be reviewed by Iran only If Trump lifts the sanctions and our supreme leaders gives permission to hold such talks."

Iran also demands that the US return to the internationally binding JCPOA and observe its provisions as a prerequisite for talks with Trump.

His regime has no intention of fulfilling its obligations under international law — why diplomatic talks with its hardliners will achieve nothing positive.