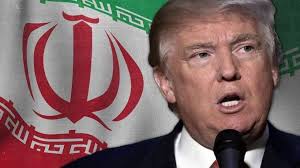 It should terrify everyone for pushing things toward possible war on the country, a nation of 81 million people, second in regional population size to Egypt, armed with sophisticated weapons able to hit back hard if attacked.

Trump regime hardliners Bolton and Pompeo want war on the country, pushing Trump in this direction.

He's manipulated by hardliners in charge of his geopolitical agenda, including Pentagon hawks, somewhat restrained by their cooler head counterparts — knowing war on Iran would be a far greater undertaking than other nations the US attacked since Vietnam.

A similar quagmire could result, including body bags returning home, highlighted by media hostile to Trump, wanting him defeated in 2020.

At the same time, the fourth estate is militantly hostile toward Iran, on board for transforming the country into a US client state, wanting Israel's main regional rival eliminated by restoring pro-Western fascist rule over Iranian sovereign independence.

The fullness of time will tell what's coming. Will or won't the Trump regime attack Iran preemptively?

If happens it'll likely follow a significant false flag incident, most likely resulting in US casualties, the way to arouse public anger and enlist congressional support — the Islamic Republic wrongfully blamed for what it surely won't have anything to do with.

It came in response to Tehran's legal JCPOA right to increase its uranium enrichment beyond limits it voluntarily agreed to observe.

Foreign Minister Zarif said his nation "surpassed the 300kg (low-uranium enrichment) limit, and we had already announced" an intention to exceed it," adding:

"(W)e have said very clearly what we are doing and consider this as part of our rights as per the JCPOA."

He, President Rouhani, and other Iranian officials said uranium enrichment would increase because Britain, France, Germany, and the EU breached their JCPOA obligations.

If they fulfill them ahead, Iran will reduce the amount of uranium it enriches, so far not exceeding a 3.67 level, far below the 90% level required to produce nukes.

No evidence whatever suggests Iran wants to develop and produce these WMDs it considers hostile to Islam, wanting them eliminated everywhere.

Arms Control Association executive director Daryl Kimball explained that no international standard prohibits Iran from enriching uranium, saying it "is not the case" that Tehran is in breach of its nuclear obligations. "That is the (unjustifiable) American position."

The White House called it "a mistake under the Iran nuclear deal to allow Iran to enrich uranium at any level" — its legal right, the same as 31 other nations with nuclear reactors, and over 50 others with nuclear research reactors.

The White House claim that "(t)here is little doubt that even before the deal's existence, Iran was violating its terms" sounded like a nonsensical (GW) Bushism adding:

"We must restore the longstanding nonproliferation standard of no enrichment for Iran" — legal under Nuclear Non-Proliferation Treaty and JCPOA.

"The United States and its allies will never allow Iran to develop nuclear weapons" it clearly doesn't want.

At the same time, US officials ignore nuclear armed and dangerous Israel, also maintaining illegal stockpiles of chemical, biological and other banned weapons.

A same-day State Department disinformation statement was more hostile than the White House.

Nor is the Islamic Republic the "world's leading state sponsor of terrorism (sic)…us(ing) its nuclear program to extort the international community and threaten regional security (sic)" — dubious distinctions applying to the US, NATO, Israel, and their imperial partners.

These nations "pose (the) great(est) danger to the region and to the world," mainly because of Washington's hegemonic rage to control all other nations, their resources and populations.

Wars of aggression against sovereign independent countries threatening no one is its longstanding favored strategy — military Keynesianism on steroids.

Throughout most of the post-WW II era, Washington's permanent war agenda has been and remains official policy by both right wings of the one-party state.

The late Seymour Melman explained that "every major aspect of American life is being shaped by our Permanent War Economy."

Half or more of US households are poor, disadvantaged, uneducated, "disconnected from society's mainstream, restless and unhappy, frustrated, angry, and sad," Melman stressed.

It features permanent wars, debauched leadership, lost industrialization, crumbling infrastructure, and deprived millions on their own, uncared for, unwanted, ignored, and forgotten to assure steady funding for America's wars and corporate handouts at the expense of peace, equity and justice.

Things have been on an ominous trajectory toward possible US war on Iran since Trump illegally withdrew from the JCPOA, an international agreement, unanimously adopted by Security Council members, making it binding international law, requiring all nations to observe its provisions.

Trump accusing Iran of "playing with fire" sounds ominously like his earlier "fire and fury like the world has never seen" threat against North Korea.

There's no way to know for sure what's coming, but some signs give hope. Pompeo and Bolton haven't swayed NATO nations to join a US coalition for war on Iran — except perhaps for Britain, joined at the hip with Washington for all its wars of aggression.

House and Senate members near-unanimously approved a declaration of war, one congressional member alone opposing it.

As the saying goes, the rest is history. The 9/11 mother of all false flags was a second Pearl Harbor. Will a third one launch war on Iran?

False flags are a longstanding US tradition since the mid-19th century. No matter how many times Americans are fooled, they're easy marks to be duped again.

War on Iran would be disastrous for the country, region, and world peace — why it's crucial for nations and activists against it to go all-out to prevent US aggression against another nonbelligerent nation, supporting the rule of law, threatening no one.