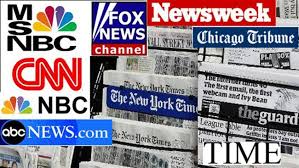 Selling War, Deploring Peace, How the US and its Press Agent Media Operate

The US is a warrior state, permanently at war with invented enemies. Real ones haven't existed since WW II ended. The power of state-sponsored and supportive media propaganda creates them.

Along with Venezuela, Iran is in the eye of the storm, both countries targeted by the US for regime change.

So far it's by war by other means alone, the risk of things turning hot ominously real, especially against Iran.

"The 'War on Iran' has been on the drawing board of the Pentagon since the mid-1990s under US Central Command's (USCENTCOM) 'Strategy of Dual Containment' directed against 'the Rogue States of Iraq and Iran' formulated during the Clinton administration," adding:

" 'First Iraq, then Iran:' The stockpiling and deployment of advanced weapons systems directed against Iran started in the immediate wake of the 2003 bombing and invasion of Iraq."

War plans drafted earlier are updated over time as dictated by events and objectives of US regimes in power.

Trump hardliners, together with Pentagon commanders, no doubt have their own, implementation another matter entirely.

The current White House matches or exceeds Bush/Cheney's hostility toward Iran. War by other means alone went on during their time in power.

Trump greatly escalated this strategy against Iran, wanting its economy crushed, its people immiserated, the same strategy used against Venezuela.

It's not coincidental that both nations are oil rich, the US wanting control over their vast resources, going all-out to achieve it short of hot war so far that's possible against both countries, especially against Iran.

False flag tanker and related incidents, along with sending a US spy plane illegally into Iranian airspace to be downed, were steps intended to push things toward war on Iran.

It hasn't happened so far but could ahead. It's clear that if the Trump regime intends attacking Iran militarily, it'll create a pretext to justify what's never justifiable under the UN Charter and other international law.

Manipulating public, congressional, and world community sentiment for war is key for going this far.

When US war on a targeted nation is planned, establishment media salute and support it — its illegality and the horrific human toll of no consequence.

A featured NYT opinion piece shamefully claimed, "Iran is rushing to build a nuclear weapon" — despite not a shred of credible evidence suggesting it, just the opposite.

The piece by John Mearsheimer suggested increased Iranian uranium enrichment is a step toward developing nukes.

Its ruling authorities are doing nothing different from how dozens of other nations with nuclear reactors operate. It's actions are entirely legal, not breaching the JCPOA or Nuclear Non-Proliferation Treaty — how the US, NATO and Israel operate.

According to Mearsheimer, hardline Trump regime policies toward Iran make "it clear that (its) leaders were foolish not to develop a nuclear deterrent in the early 2000s," adding:

If tougher White House tactics "escalate pressure on Iran" more than already, it "almost certainly means it will move to build its own nuclear arsenal."

Moving in this direction can't be hidden. If Iran earlier began a program to develop and produce nukes, US war on the country most likely would have been waged by one of Trump's predecessors to prevent the country from achieving this deterrent.

Wall Street Journal editors are militantly hostile toward Iran, earlier falsely claiming its forces "made plans to target US forces in Iraq and elsewhere in the Middle East" — a bald-faced Big Lie.

So was saying Iran and Syria are "tr(ying) to establish a terror beachhead in southern Syria against Israel" — a disgraceful remark polar opposite reality.

The agreement "failed to cover Iran's imperialism (sic) and terror promotion in the Middle East (sic), as well as its ballistic-missile program."

Iranian ballistic missiles are legal and intended solely for defense — polar opposite how the US, NATO countries, Israel, and their imperial partners operate.

No Iranian "imperialism (or) terror promotion" exists anywhere, the specialty of the above countries, not how the Islamic Republic operates.

Virtually all anti-Iran media disinformation pieces ignore key elephants in the room — endless US aggression against nations threatening no one, its rage for global dominance, its threat to world peace, along with nuclear armed and dangerous Israel, an aggressor state with WMDs.

Nor is it ever explained that the Islamic Republic is at peace with its neighbors, threatening none, and never attacked another nation since its 1979 revolution.

No evidence suggests its longstanding peace agenda will change — or that it intends developing nukes it abhors.