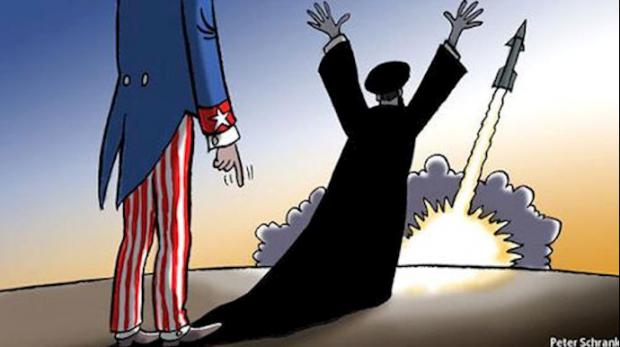 Recklessly dangerous hostility toward Iran by US media, bipartisan hardliners in Washington, Israel, and its Lobby has things heading toward possible war on the country if efforts aren't made to step back from the brink.

Instead they're going in the opposite direction based on bald-faced Big Lies and deception about a country at peace with other nations, threatening none.

Iran's agenda is polar opposite how the US and its imperial partners operate, supported and encouraged by establishment media, vilifying nations on the US target list for regime change.

The Islamic Republic has been a prime target since its 1979 revolution, ending a generation of US-imposed fascist dictatorship.

Establishment media long ago abandoned fundamental journalistic principles, instead serving as press agents for wealth, power and privilege — especially when the US goes to war, plans one, or takes other hostile actions against nations it doesn't control like Iran.

In response to Trump's stepping back from attacking Iranian targets on Friday, the self-styled newspaper of record NYT urged him "to convince nations that share American values (sic) of the justification for retaliating against Iran" — supporting hostile actions against the country instead of denouncing them against a nonbelligerent nation threatening no one.

The Times falsely blamed Iran for incidents it had nothing to do with. The same goes for other US media.

The neocon/CIA-connected Washington Post expressed opposition to attacking Iranian targets "without a coherent goal, and thus without any prospect of a successful outcome."

WaPo falsely accused Iran of the Gulf of Oman incident, along with sabotaging Saudi and UAE tankers it had nothing to do with — fabricated pretexts for war if the Trump regime intends using them for this purpose, as well as the IRGC's downing of a US spy plane in Iranian airspace, an act of self-defense unexplained in the mainstream.

"The question for American interests is whether Iran and other adversaries will see it instead as a sign of weakness and indecision," adding:

Trump's wavering "may be risking more American lives later," promoting US aggression instead of opposing it.

The NYT, WaPo, and other establishment media repeated the same fabricated accusations.

They're bald-faced Big Lies, not a shred of credible evidence supporting them. Facts never interfere with propaganda reports.

In their book titled "Weapons of Mass Deception," Sheldon Rampton and John Stauber showed how manipulative propaganda sells the public on war.

In his similarly titled book "Embedded: Weapons of Mass Deception," Danny Schechter explained that wars are fought with standing armies, along "with cameras, satellites, armies of journalists, and propaganda techniques," adding:

"We live in a media-ocracy. Mainstream politics and mainstream media have morphed, converged, cross pollinated and merged to" manipulate and influence public opinion on major issues.

Following major media for news and information assures knowing only what powerful interests want drummed into the public mind by the power of propaganda repeated endlessly.

It's how wars and other hostile actions are sold, manufacturing consent, a euphemism for mind control — first used in the US to turn pacifist Americans into raging German-haters ahead of Washington's involvement in WW I.

In 1916, Woodrow Wilson was reelected on a pledge of: "He Kept Us Out of War." Straightaway, he began planning US involvement.

He established the Committee on Public Information (CPI or Creel Committee). Its mission was enlisting public support for war, along with undermining opposition sentiment.

Propaganda works the same way today with greater sophistication, including the power of television nonexistent then.

It'll be delivered by supportive establishment media to a gullible public, believing most anything repeatedly endlessly — no matter how many times Americans were deceived before.