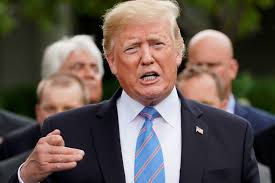 Trump Threatens to Attack Iran, Then Pulls Back

Days after calling last week's Gulf of Oman incident "very minor," stepping back from possible war on Iran, Trump called its downing of a US spy drone (in its own airspace he failed to explain) "a very big mistake."

Responding to whether he'll order a strike on the country in retaliation against what was a hostile US act, he ominously said: "You'll soon find out" — a worrisome sign.

Attacking Iran would be "a very big mistake," a nation able to hit back hard against an aggressor and disrupt oil shipments through the Gulf of Hormuz if its own are blocked.

By letter to UN Secretary-General Antonio Guterres, Iranian UN envoy Majid Takht-e Ravanchi condemned the provocative intrusion of a US spy plane in its airspace, saying the following:

"Iran condemns, in the strongest possible terms, this irresponsible and provocative wrongful act by the United States, which entails its international responsibility," adding:

"While the Islamic Republic of Iran does not seek war, it reserves its inherent right, under Article 51 of the United Nations Charter, to take all appropriate necessary measures against any hostile act violating its territory, and is determined to vigorously defend its land, sea and air."

"This is not the first provocative act by the United States against Iran's territorial integrity" and clearly won't be the last.

There's "irrefutable evidence about the presence of this drone in Iran's airspace, and even some parts of its wreckage have been retrieved from Iranian territorial waters."

Iran's Foreign Minister Mohammad Javad Zarif tweeted: "The US wages #Economic Terrorism on Iran, has conducted covert action against us & now encroaches on our territory."

"We don't seek war, but will zealously defend our skies, land & waters."

"We'll take this new aggression to #UN & show that the US is lying about international waters."

"We've retrieved sections of the US military drone in OUR territorial waters where it was shot down."

A statement by the Islamic Revolutionary Guard Corps (IRGC) explained that the US spy drone's identification transponder was switched off "in violation of aviation rules and was moving in full secrecy" when it was downed over Iranian territorial waters.

Iran will present evidence to the UN proving it. During his annual marathon Q & A session, fielding questions on numerous issues, Vladimir Putin said the following on possible US aggression against Iran:

Attacking Iran militarily by the US "would be a catastrophe at least for the region, because it would trigger violence and, possibly, an increase in the number of refugees from the region," adding:

"For those who might make such attempts the consequences would be very sad, too, because it is very hard to foresee what the use of military force might entail."

He stopped short of indicating how Russia might respond to possible US aggression against the Islamic Republic, a nonbelligerent nation threatening no one.

Separately, European External Action Service (EEAS) secretary Helga Schmid stressed that the IAEA "confirmed in 15 reports that Iran abides by its nuclear related commitments" — even after increasing its uranium enrichment and storage, including retention of its heavy water.

House Speaker Nancy Pelosi said "it's a dangerous situation," adding she doubts Trump wants war. "There is no appetite for going to war" on Iran, including by many congressional members.

After sounding bellicose, Trump softened his rhetoric, saying "I find it hard to believe it was intentional. I would imagine it was a general or somebody who made a mistake in shooting the drone down," adding:

The NYT reported that he "approved strikes on Iran, but then abruptly pull(ed) back from launching them on Thursday night after a day of escalating tensions," adding:

"Officials said the president had initially approved attacks on a handful of Iranian targets, like radar and missile batteries."

"The operation was underway in its early stages when it was called off, a senior administration official said. Planes were in the air and ships were in position, but no missiles had been fired when word came to stand down, the official said."

First, it's unclear if the above information is accurate or whether it's the official story the White House wants reported.

It's also unclear if Trump ordered strikes on Iran, then called them off, or if shifted them to a later time frame — perhaps with greater force against more targeted sites.

According to the Times, Pompeo, Bolton, and CIA director Gina Haspel pushed for a strike. Pentagon commanders reportedly cautioned against it because of likely IRGC retaliation against US regional forces.

Striking Iran over the Gulf of Oman and earlier May regional incidents it had nothing to do with would be going to war based on Big Lies and deception — what unjustifiably justifies all wars of aggression, including all US ones from Harry Truman's aggression against North Korea in the early 1950s to all post-9/11 conflicts.

On Thursday, Iran's IRGC commander-in-chief General Hossein Salami said "(t)he downing of the American drone was a clear message to America (that Tehran will) react strongly" to any aggression.

He stressed that the Islamic Republic wants regional peace and stability, but is "fully prepared to defend" itself if attacked by an aggressor.

Self-defense is a universal right, affirmed by the UN Charter, stating in Article 51:

"Nothing in the present Charter shall impair the inherent right of individual or collective self-defense if an armed attack occurs against a Member of the United Nations, until the Security Council has taken measures necessary to maintain international peace and security."

Iran is the prime US/Israeli regional target for regime change. Attacking the country would risk boiling over the Middle East more than already.

The Islamic Republic can't match US military strength, but its ballistic and cruise missiles can accurately strike its regional bases and warships, along with Israeli, Saudi and UAE targets if these nations get involved in hostilities against its territory.

Iran never attacked another country preemptively, threatening none now — polar opposite how the US, NATO, Israel, and their imperial partners operate.

Not a shred of credible evidence suggests Tehran had anything to do with preemptive belligerent incidents anywhere throughout its history.

Days earlier, a fabricated US intelligence report suggested a large-scale Iranian assault on a Saudi oil facility was coming in days. No credible evidence suggests it.

"Nevertheless, when it comes to air defense of our country, we consider using foreign potential in addition to our domestic capacities."

Iran has Russian S-300 air defense missiles. It may be seeking S-400s from Moscow for greater defensive capabilities.

Separately on Thursday, the US Federal Aviation Agency (FAA) banned commercial air traffic in Iranian airspace over its territorial waters.

US flights to Iran are legal. Will banning them altogether follow the above explained FAA ban?

Of far greater concern is whether Trump will yield ahead to Pompeo and Bolton on striking Iranian sites.

Perhaps it's coming in response to a greater US-orchestrated false flag than the Gulf of Oman and May incidents.

Something against a US warship similar to the August 1964 Gulf of Tonkin false flag could get Trump to order strikes on Iranian targets.

What earlier led to over a decade of US Southeast Asia aggression and quagmire could happen in the Middle East by attacking Iran — based on Big Lies and deception.