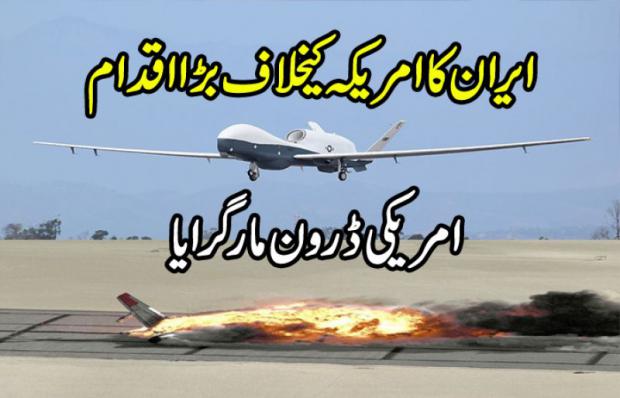 Iran Downs Hostile US Spy Drone in Its Airspace

The IRGC said further details of the intrusion will be announced later.

A Pentagon spy plane provocatively entering Iranian airspace when tensions between both countries are at a fever pitch was a hostile act, further heightening them.

An unnamed Trump regime official claimed the RQ-4 Global Hawk was shot down in "international airspace" by an Iranian surface-to-air missile.

Ahead of the incident on Tuesday, head of Iran's Supreme National Security Council (SNSC) Ali Shamkhani said the Islamic Republic will defend its airspace, territorial waters, and borders from hostile intrusions.

Days earlier, unnamed Western diplomatic sources told the Israeli Hebrew-language Maariv broadsheet that the Trump regime is planning a "tactical assault" on an Iranian nuclear facility in response to last week's Gulf of Oman attacks on two tankers — no evidence suggests the Islamic Republic had anything to do with.

An unnamed Western diplomat was quoted saying "(t)he bombing will be massive but will be limited to a specific target" — an Iranian response in self-defense highly likely if this occurs, its legal right under international law.

The Pentagon hasn't confirmed the downing of its spy drone so far, nor has the State Department commented on the incident.

He, Bolton, and their hardline underlings are selling war on nonbelligerent Iran threatening no one.

Downing of the Pentagon's spy drone came when Yemini Houthis reportedly struck a major Saudi power plant in the kingdom's southern Jizan province with a cruise missile, according to Yemini al-Masirah television.

It followed a similar attack on the Abha International Airport in southern Saudi Arabia, injuring dozens and shutting down the facility.

According to AMN News on Thursday, Houthi forces made a "large-scale advance inside Saudi Arabia's Najran Province near the Yemeni border, captur(ing) more than 20 military sites" in the kingdom, "inflicting heavy losses on the enemy troops."

The US accuses Iran of supporting the Houthis, their latest actions likely to further heighten tensions with the Trump regime, pushing things closer to possible war Trump said he doesn't want, but as his record shows, time and again he said one thing and went another way.

"There are legitimate concerns about taking the administration at its word," Deutch stressed, quoting former State Department official Greg Thielmann on Bolton's earlier intelligence disinformation in the run-up to Bush/Cheney's aggression on Iraq, saying last month:

"The pattern that I've seen with Bolton then and subsequently is that he has established quite a track record of cherry-picking intelligence information that serves whatever case he's going to make."

Deutch called Bolton "a long-time proponent of regime change in Tehran. He continually questions the utility of negotiating with Iran and frequently indicates that (its ruling authorities) will not be in power in the coming years."

The congressman questioned Pompeo's dubious claim about (nonexistent) Iranian support for Taliban fighters in Afghanistan "against American and allied interests" — no evidence whatever suggesting it.

Deutch also questioned Hook about whether the White House intends using the 2001 Authorization for Use of Military Force (AUMF) to wage war on Iran.

Clearly it provides no legal justification to attack any nation. Security Council members alone may authorize one country to attack another, permitted only in self-defense, never preemptively.

Using the AUMF to strike Iran would be naked aggression against a nation threatening no one. Hook declined to say if the Trump regime intends using it as authorization to wage war on the Islamic Republic.

Claiming "we will comply with the law" is belied by ongoing US aggression in Afghanistan, Syria, Yemen, and elsewhere, along with all-out war by other means on Iran and Venezuela, similar less extreme actions against Cuba and Nicaragua.

All of the above are illegal under international, constitutional, and US statute laws — never standing in the way of US actions against nations targeted for their sovereign independence and opposition to its imperial agenda.

On Wednesday, the State Department said Hook will visit Saudi Arabia, the UAE, and other Gulf states to discuss (nonexistent) "Iran(ian) regional aggression."

It's a longstanding US, NATO, Israeli specialty, not how the Islamic Republic operates — not earlier, not now.

Claims otherwise are part of the Trump region's disinformation campaign against the country, risking war that likely would be far more devastating than other post-9/11 conflicts — why it's crucial to avoid.