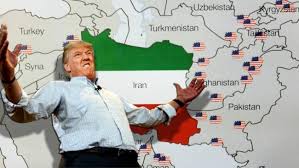 More US Fake News About Iran

Bolton, Pompeo, their henchmen, and likeminded Pentagon hardliners are going all-out to manufacture a case for war on Iran based on disinformation, Big Lies and fake news.

The US navy claims it removed limpet mine fragments and a magnet from one of two tankers attacked in the Gulf of Oman last week, whether true or false unclear. Either way doesn't matter.

"The limpet mine that was used in the attack (sic) is distinguishable and also strikingly bearing a resemblance to Iranian mines that have already been publicly displayed in Iranian military parades," adding:

Damage done to the tanker was "not consistent with an external flying object hitting the ship" — contradicting eyewitnesses to the incident aboard the vessel.

The above remarks have no credibility or validity. Not a shred of evidence suggests Iranian responsibility for the Gulf of Oman incident or weeks earlier regional ones.

Last Friday, Yutaka Katada, president of the company owning the damaged Kokuka Courageous refuted the Trump regime's claim, saying there's a "high chance" that a "flying object" struck the ship, not a mine as the Trump regime claimed.

"I do not think there was a time bomb or an object attached to the side of the ship. The crew told us something came flying at the ship, and they found a hole. Then some crew witnessed the second shot," he explained.

No credible evidence backs the Trump regime claim about Iranian responsibility for what happened.

Aside from Britain sticking to the fabricated claim, other European countries doubt it.

A grainy and clearer video of an alleged Iranian vessel removing an unexploded mine attached to the Kokuka Courageous could easily have been doctored, a stunt the US pulled and its imperial accomplices pulled before.

Iranian Defense Minister General Amir Hatami said accusations "against Iran are totally a lie and I dismiss them firmly," adding:

The US "can show any footage…but it cannot be used as evidence." Nor can phony claims about mine fragments and a magnet linked to Iran because the US navy says so.

Washington unjustifiably justifies all its wars of aggression and other hostile actions based on bald-faced Big Lies and deception.

No official statements about US adversaries by Washington or the Pentagon are credible. Demonizing them builds a case for regime change by war or other hostile actions based on fabricated claims.

Propaganda works as intended. It precedes and accompanies all US wars of aggression, the dominant fourth estate providing press agent services, convincing the public to support what demands condemnation, or at least not strongly express opposition.

Bipartisan hardliners vilified Iran for the past 40 years, war plans to topple its government prepared long ago, updated over time but never implemented.

"Despite a propaganda campaign against Iran by (its enemies), no war will break out because there is no reason for a war," adding:

The Trump regime aims to harm Iran's economy by exerting "maximum" pressure. It's not working because Iranians are resisting its hostile actions.

The harder the US pushes, the greater the enmity of the Iranian people against Washington's imperial agenda, the same true in Syria, Venezuela, North Korea, and elsewhere.

"Iran once again will turn all US sanctions into opportunity," Shamkhani believes.

"The entire world believes that Iran had exercised strategic patience and logic, and its moves have been based on international regulations."

Iran "fully live(s) up to its (JCPOA) commitments," affirmed by IAEA monitors. "(D)espite what some countries say, what we are doing is the least we could do" to stay committed to the agreement.

Under Article 26, suspension of its voluntary commitments is permitted by Iran if one or more other countries impose sanctions on the country relating to the agreement, the JCPOA stating:

"Iran has stated that it will treat such a re-introduction or re-imposition of the sanctions specified in Annex II, or such an imposition of new nuclear-related sanctions, as grounds to cease performing its commitments under this JCPOA in whole or in part."

Under Article 36, Iran is afforded the same right, according to the JCPOA Dispute Resolution Mechanism. Tehran remains in compliance with the agreement despite increasing the level of its uranium enrichment and storage, along with retaining its heavy water.

The IAEA earlier said it may increase its uranium enrichment level while respecting the nuclear treaty.

It's complying the the JCPOA along with Russia and China. The Trump regime flagrantly breached it by pulling out.

So did Britain, France, and Germany by failing to observe its provisions, promising adherence with no follow-through.