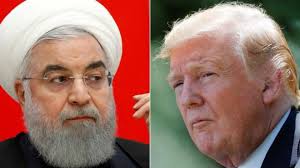 Good and Bad News on Possible US War on Iran

US war on Iran if launched would devastate the region more than already. It would risk escalation to something more serious, risking possible global war if Russia intervenes as it did in Syria.

"(T)he reckless and dangerous policies and practices of the US and its regional allies (is) heightening the tensions in the region," adding:

"The Islamic Republic of Iran reiterates that the only solution to the tension in this region is the active and constructive engagement of all regional countries within the context of a genuine dialogue based on mutual respect, inclusivity and basic principles of international law."

"Iran stands ready to play an active and constructive role in ensuring the security of strategic maritime passages as well as promoting peace, stability and security in the region."

Last Thursday at a closed-door Security Council session on the Gulf of Oman incident, acting US envoy Jonathan Cohen falsely blamed Iran for what no evidence indicates it had anything to do with, at the same time calling for US/Iran dialogue.

During the session, Russia's UN envoy Vassily Nebenzia called for investigating the Gulf of Oman incident before blaming anyone for what happened, adding:

"The organizers should be discovered and brought to responsibility."

"However, we emphasize that deliberate escalation of the situation and rash accusations do not add to conducting an unbiased international investigation."

"On the contrary, they politicize the investigation and undermine trust to it. We call upon all sides to begin dialogue and make only weighed judgements."

"Escalation of aggressive accusatory rhetoric, deliberate incitement of anti-Iranian sentiment has a destabilizing impact on the tense situation in the entire Middle Eastern region, and can undermine the collective diplomacy."

Separately, Pompeo warned that if Iran is responsible for the death of a single Pentagon service member it would generate a tough US military response.

According to an unnamed White House official: "What happens if Americans are killed? That changes the whole thing. It changes everything."

An unnamed German official said the US "created this mess, and now they have to find a way to get out" short of war Berlin opposes.

Last month, Pompeo said the Trump regime doesn't need congressional approval for war on Iran, falsely claiming the AUMF (Authorization for Use of Military Force) provides a legal basis which it does not.

A senior Mogherini advisor said "(b)efore we blame someone, we need credible evidence." None exists about Iranian involvement in hostile regional incidents.

Indisputable evidence shows culpability of the US and its imperial partners for endless high crimes of war and against humanity, accountability never forthcoming.

"Allies resent US pressure to force them to break economic ties with Tehran," the Journal added. They're "fearful that (dubious) intelligence will be spun into a predicate for war."

As discussed in a same day article, Trump is reluctant to go to war on Iran unless it pursues nuclear weapons it doesn't want or seek, calling the Gulf of Oman incident "very minor."

Will or won't his regime attack Iran? Shifting signals suggest it could go either way, but if Trump, Brussels, Russia, and China urge dialogue over conflict, there's a good chance to avoid embroiling the region more than already.