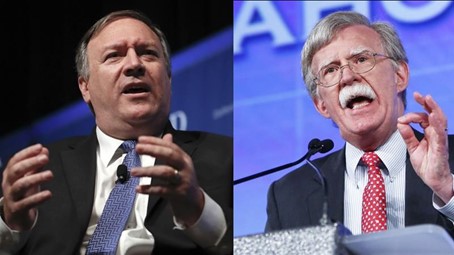 Trump Regime Planning War on Iran Based on Big Lies and Deception?

Fast-moving events suggest that unthinkable US preemptive war on Iran is possible, a reckless act if launched — like all wars, based on Big Lies and deception. More on this below.

With no public debate or acknowledgement, hardliners in Washington usurped power. Days after 9/11, Clark learned from Pentagon commanders that plans were made to "destroy the governments in seven countries."

Besides Afghanistan, Yemen, and partnering with Israeli wars on Palestinians, they include Iraq, Syria, Lebanon, Libya, Somalia, Sudan, and Iran.

"Our first objective is to prevent the re-emergence of a new rival, either on the territory of the former Soviet Union or elsewhere, that poses a threat on the order of that posed formerly by the Soviet Union."

"This is a dominant consideration underlying the new regional defense strategy and requires that we endeavor to prevent any hostile power from dominating a region whose resources would, under consolidated control, be sufficient to generate global power."

His doctrine was a declaration of endless wars against all sovereign independent countries. The 1990s featured the Gulf War, followed by over a dozen years of genocidal sanctions on the Iraqi people, a decade of Balkan wars, culminating with the 1999 rape of Yugoslavia waged by the Clinton co-presidency.

The 9/11 mother of all false flags opened the gates of hell for wars of aggression against one nation after another.

Iran remains the US/Israeli prime target for regime change, the Trump regime waging all-out war by other means, threatening to turn hot because sanctions and related hostile actions haven't toppled its government for the past 40 years and won't likely ahead.

Plan B may be preemptive hot war on the country. Unfolding events bear close monitoring.

"In response to a request from the US Central Command (CENTCOM) for additional forces, and with the advice of the chairman of the Joint Chiefs of Staff and in consultation with the White House, I have authorized approximately 1,000 additional troops for defensive purposes (sic) to address air, naval, and ground-based threats in the Middle East" — despite only invented ones exist, adding:

"The recent Iranian attacks (sic) validate the reliable, credible intelligence (sic) we have received on hostile behavior by Iranian forces and their proxy groups (sic) that threaten United States personnel and interests across the region (sic)."

Not a shred of credible evidence links Iran to May and June, or other regional hostile acts. Clearly its ruling authorities have nothing to gain from aggressive actions, everything to lose.

The US, NATO, Israel, and their imperial partners benefit greatly from the Gulf of Oman and weeks earlier incidents by falsely linking Iran to them.

Shanahan turned truth on its head claiming the US "does not seek conflict with Iran" while Trump regime war by other means against the country rages, along with hot wars in multiple theaters against nations threatening no one.

Deploying more Pentagon combat forces to an oil-rich part of the world US seeks unchallenged hegemony over has nothing to do with "ensur(ing) the safety and welfare of our military personnel working throughout the region," everything to do with pursuing US imperial interests.

On Sunday, Netanyahu broke his near-silence on the Gulf of Oman incident, saying "(a)ll peace seeking nations need to support the efforts of the United States and President Trump to stop this dangerous (Iranian) aggression (sic) and to ensure freedom of navigation in international waterways" — despite nothing threatening them except defensive Tehran actions in response to US belligerence if occurs.

"US intelligence learn(ed) from a highly credible source (sic) that Iran's Revolutionary Guards have completed preparations for a large-scale assault on an important Saudi oil facility within days (sic)," adding:

The Trump regime "is gearing up for a military response." The Islamic Republic seeks confrontation with no other nations. It's the region's leading peace and stability proponent.

No credible evidence suggests it's planning a preemptive attack against the Saudis or any other regional countries. False claims otherwise are part of the escalating propaganda war on the country.

They represent a dangerous development. Trump is being mislead by disinformation and Big Lies about nonexistent hostile Iranian intentions.

Preemptively attacking selective or more extensive targets in the country would virtually assure retaliation, risking full-scale war  on a nation able to hit back hard against belligerents and block the Strait of Hormuz, through which over a third of seaborne oil shipments pass en route to world markets.

Hostility toward Iran by Trump, Pompeo, Bolton, and their henchmen showed up clearly when the regime pulled out of the JCPOA nuclear deal, an international agreement adopted by Security Council members, making it binding international and US constitutional law under its Supremacy clause (Article VI, clause 2).

Withdrawal was a shot across the bow for hostile actions to follow, things perhaps coming to a head following May and June regional incidents with likely US, and perhaps Israeli, fingerprints all over them.

Clearly Iran had nothing to do with what happened. No credible evidence suggests it. Accusations without it are groundless.

On Monday, the Pentagon released new images of a small vessel approaching the Japanese-owned Kokuka Courageous tanker, claimed to be Iranian, allegedly removing an unexploded limpet mine attached to the vessel, a statement saying:

"Iran is responsible for the attack based on video evidence and the resources and proficiency needed to quickly remove the unexploded limpet mine (sic)."

Videos and other images are easily doctored. It happened many times before to fake evidence, used as pretexts for unjustifiable hostile actions.

Last week, Trump lied claiming the Gulf of Oman incident had "Iran written all over it." Iranian Parliament Speaker Ali Larijani said the US was likely responsible for attacking two tankers in gulf waters, citing its tradition of staging "false flag(s)" to justify naked aggression against nonbelligerent countries, adding:

Accusations about May and June regional incidents and "are supplementary to economic sanctions because (the Trump regime) did not reach (its) goals through the sanctions."

He mocked Pompeo's statement about pursuing diplomacy with the Islamic Republic. "Is it diplomacy to start a face-off with a revolutionary nation with acts of economic terrorism, which they themselves call the toughest ever," he asked?

"Is it diplomacy, Mr Pompeo, to renege on one's promises in the nuclear agreement?"

Hostile US actions supported by Britain, Israel, the Saudis and UAE are advancing things perilously toward possible war on Iran.

Attacking the nation would risk having the region boil over more than already. If Russia intervenes as it did to combat US-supported terrorists in Syria, global war could follow.

These and related events are why today is the most perilous time in world history. The risk of possible US-launched nuclear war is real — able to destroy planet earth and all its life forms if happens in earnest.

While these dangerous events are unfolding, the US public is largely unaware and perhaps indifferent to what threatens their welfare, security and lives.