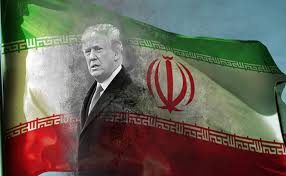 Washington demands other countries observe international laws, norms and standards, while it consistently breaches them.

Reciting a long ago discredited laundry list of bald-faced Big Lies about the country, she stressed that nonexistent Islamic Republic malign intent is "consistent with how (it) behaves," turning truth on its head, concealing how the US and its imperial partners operate extrajudicially.

"(W)e should not yield to (nonexistent) nuclear extortion by" Tehran, she roared — demanding its ruling authorities "not obtain a nuclear weapon (they don't seek) and to abide by the (JCPOA) commitments that they've made to the international community" — the Trump regime flagrantly breached.

"Iran's enrichment plans are only possible because the horrible nuclear deal (sic) left the their capabilities intact (sic)," adding:

"President Trump has made it clear that" he supports nuclear armed and dangerous Israel, a regional belligerent, while remaining militantly hostile toward Iran's peace and stability agenda — calling for "increased international pressure" on Tehran.

The IAEA earlier said that Iran could increase its uranium enrichment level while respecting the nuclear treaty.

"We will not wage war with any nation." Unlike how the US and its imperial partners operate, Iran seeks cooperative relations with other countries, confrontation with none.

On Monday, spokesman for Iran's Atomic Energy Organization Behrouz Kamalvandi called for EU countries to "act, not talk" by fulfilling their JCPOA obligations they failed to do so far and show no signs of changing their policy.

"Europe still has time," Kamalvandi stressed, adding: "(F)ulfillment of its obligations under the nuclear deal will return (things) to normal."

Last week, President Rouhani said Iran will suspend some of its JCPOA commitment if Europe shows no "positive signals," adding:

Trump regime rage against Iran increases the risk of war on the country based on Big Lies and deception.

It estimates Israel's nuclear stockpile at 80 to 90 warheads, Haaretz reported.

Iran has no nukes, no known intention to develop them, wanting them eliminated everywhere — what the world community of nations and UN should urge but aren't pushing in this direction.