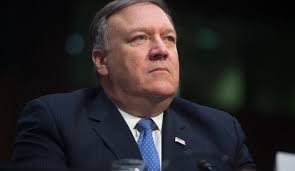 Pompeo Sells War on Nonbelligerent Iran Based on Big Lies

Appearing on establishment TV Sunday talk shows, Pompeo tried justifying unjustifiable war on Iran — based on Big Lies. More on this below.

The Islamic Republic is the Middle East's leading proponent of peace and stability, seeking cooperative relations with other countries.

It's at war with none, threatening none, polar opposite how the US and its imperial partners operate globally.

Tactics against targeted nations include vilifying their ruling authorities, spreading disinformation, Big Lies, and fake news about them, aimed at building world community and public consensus for actions the US intends to take — no matter how unjustifiable.

The strategy requires establishment media support, getting them to stick to the official narrative exclusively, suppressing hard truths, while blasting managed news misinformation and disinformation to readers, listeners and viewers, convincing them by the power of propaganda repeated endlessly.

All of the above is a softening up process preceding and accompanying hostile US actions. Throughout the post-WW II era, the US waged endless wars by other means and hot wars against one country after another threatening no one.

Without world community, public, and media support, or at least avoiding their opposition, the best laid US plans wouldn't get out of the starting gate.

Time and again, polls show most Americans have negative views about nations the US vilifies, showing the power of propaganda works.

Endless US aggression rages in Afghanistan, Yemen, Syria, along with Iraq intermittently and Somalia, plus covert hostile actions against other countries.

US war by other means rages against Iran and Venezuela, hot war against one or both countries possible.

All sovereign independent countries the US doesn't control (including Russia and China) are on the its target list for regime change.

None pose a threat to the US or any other countries. US actions against them flagrantly violate international laws, norms, and standards. The world community of nations and UN are complicit for not holding US authorities accountable for their high crimes against peace.

Were hostile Middle East May and June incidents with US and likely Israeli fingerprints all over them prelude to war on Iran?

Will the Trump risk boiling over the region more than already, along with waging propaganda wars on Russia, China, Cuba, and Nicaragua?

Will the world community again fail to challenge possible greater US belligerence than already?

Are Americans so manipulated by the power of propaganda and distracted by bread and circuses that they're indifferent about the risk of possible greater war that could go global if things are pushed too far?

On Fox News, he was asked "(h)ow certain are you that Iran was responsible for (May and June regional incidents), and do you have more evidence that you can share with us?"

In response, Pompeo reinvented reality, saying "it's unmistakable what happened here (sic). These were attacks by the Islamic Republic of Iran on commercial shipping, on the freedom of navigation, with the clear intent to deny transit through the strait (sic)."

Not a shred of credible evidence supports the clearly fabricated accusation. Pompeo compounded his Big Lie, adding the US intelligence community "has lots of data, lots of evidence" — despite nothing proving Iranian hostile acts.

His dissembling continued, saying "the American people should rest assured we have high confidence (sic) with respect to who conducted these attacks as well as half a dozen other attacks throughout the world over the past 40 days (sic)."

The American people should have "high confidence" that they're lied to time and again by their ruling authorities, including congressional members — especially about geopolitical issues, notably about nations on the US target list for regime change.

Pompeo: The Trump regime "has done everything (it) can to avoid war. We don't want war (sic)" — while waging them in multiple theaters against nonbelligerent countries, along with war by other means against Iran, Venezuela, and other nations.

His threat about "deter(ring)" Iran is code language for perhaps intending greater hostile actions against the country than already, including possible preemptive war, the highest of high crimes.

"Iran will not get a nuclear weapon," Pompeo roared, adding: "That's the goal. That's the objective of our entire campaign with respect to Iran, and to create stability throughout the Middle East as part of that effort."

Fact: Israel is the region's only nuclear armed and dangerous country with intent to use these weapons if greatly threatened — an issue virtually never mentioned by US officials or establishment media.

Pompeo turned truth on its head claiming "Iran…wants to continue to escalate this conflict" when polar opposite is true. The US is a belligerent, not the Islamic Republic.

On CBS News' Face the Nation, Pompeo repeated the same disinformation, Big Lies, and fake news about Iran — falsely accusing its authorities "of 40 years (of) caus(ing) much trouble around the world."

It's how the US and its imperial partners operate globally, not the Islamic Republic, at peace with its neighbors, threatening none.

"Of course, of course. The president will consider everything we need to do to make sure – right," adding:

"We don't want Iran to get a nuclear weapon" — not a shred of evidence suggests it wants.

"The previous administration put them on a pathway that virtually guaranteed that they could get there (sic), so we withdrew from the ridiculous JCPOA (sic) and are moving ourselves towards a set of policies which will convince Iran to behave simply like a normal nation."

By "normal," Pompeo means subservient to US interests under pro-Western puppet rule at the expense of its sovereign rights.

The Trump regime's withdrawal in May 2018 constituted a flagrant breach, its illegal action opposed by the world community — except for Israel, the Saudis, UAE, and a few US-controlled Pacific island states.

Asked if Trump has legal authorization for war on Iran, Pompeo lied claiming "(w)e always have the authorization to defend American interests."

Fact: Security Council members alone may authorize war by one nation on others — not heads of state, lawmakers or the courts.

It's legally permitted only in response to an attack or if one is clearly imminent — never preemptively for any reasons.

No nations threatened the US since imperial Japan formally surrendered in September 1945, none today, not Iran or any others.

Washington's imperial agenda for global dominance threatens all other nations and their people.

Pompeo reinvented reality saying "the American people should be very confident the actions that the United States takes under President Trump will always be lawful (sic)."

All US post-WW II wars against one nation after another were and continue to be flagrant breaches of international, constitutional, and US statute laws.

The US wants them handed over to corporate America for looting.

Whenever US officials claim having evidence about a targeted nation's alleged malign actions and/or intent, there is none.

It was true about nonexistent "Russian aggression," nonexistent US election meddling, and other false accusations against the country.

It's true about fabricated accusations against Iran. Not a shred of credible evidence supports them because there is none.

If any existed, it would be revealed. Countless US and Israeli accusations against the the Islamic Republic were groundless, no facts supporting them.

The same goes for falsely accusing the country of hostile May and June incidents, refuted by reality on the ground.

"A new report reveals that the Israeli regime is in possession of approximately 100 atomic warheads which it refuses to confirm or deny as part of its policy of nuclear ambiguity."

"The Stockholm International Peace Research Institute (SIPRI) said Monday Tel Aviv has 30 gravity bombs which can be delivered by fighter jets – some of which are believed to be equipped for nuclear weapon delivery."

"Israel also possesses close to 50 warheads that can be delivered by land-based ballistic missiles such as Jericho III, said to have a range of 5,500 km, the global security think tank said."

"Israel is the only possessor of nuclear weapons in the Middle East, but its policy is to neither confirm nor deny having atomic bombs."

The reaction of US establishment media to the report is silence. The Jerusalem Post reported it. Earlier, Haaretz and the Times of Israel published reports on Israeli nuclear weapons.

Yet its open secret is largely ignored in the West, especially by US major media — while Iran is falsely portrayed as a nation seeking these weapons, a disturbing perversion of truth, a false pretext for possible war.