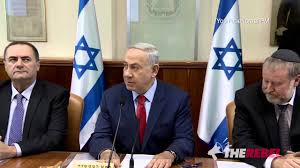 There are about 150 illegal Israeli settlements (including large neighborhoods) and around 110 outposts on stolen Palestinian land, occupied by about 650,000 Israeli settlers — no non-Jews allowed, especially no Arabs, persecuted by apartheid rule.

Under international law, Israeli settlements, outposts, and other development on Palestinian land are flagrantly illegal.

Fourth Geneva's Article 49 states: "The Occupying Power shall not deport or transfer parts of its own civilian population into the territory it occupies."

The Hague Convention forbids occupying powers from altering occupied territory, except for military necessity, clearly not the case in the Occupied Territories.

Longstanding US policy considered them "illegitimate," not illegal – until Trump abandoned all pretense about Israeli/Palestinian evenhandedness, one-sidedly supporting the Jewish state, spurning and showing utter contempt for fundamental Palestinian rights.

Months before this action, the Security Council ruled that all Israeli actions on occupied Palestinian territory, including Jerusalem, "have no legal validity."

In 2004, the International Court of Justice (ICJ) ruled that "Israeli settlements in the Occupied Territory, including East Jerusalem, "are illegal and an obstacle to peace and to economic and social development (and) have been established in breach of international law."

In May 2018, the Trump regime illegally moved the US embassy in Israel from Tel Aviv to Jerusalem – a world body-designated international city, recognized by nearly all UN member states.

The US and Israel alone recognize what the rest of the world community rejects. Golan is sovereign Syrian territory. In response to Trump's action, Russia said "(c)hanging the status of the Golan Heights bypassing the Security Council is in direct violation of UN decisions."

Statements by envoys represent the policies of ruling authorities they represent. The Trump regime consistently shows contempt for Palestinian rights and the rule of law.

"We are proud to set up a settlement that will pay tribute to our great friend. We will continue developing the Golan Heights" -- illegally he failed to explain, adding:

"The Golan will always be an inseparable part of Israel." In response on Sunday, Trump tweeted: "Thank you PM @Netanyahu and the State of Israel for this great honor" — what law-abiding leaders and other officials would want no part of.

"That's what the 'Israbluff of establishing of a new community in the Golan Heights looks like" — saying nothing about the illegality of the move.

Development of other settlements and outposts continues on stolen Palestinian land, dispossessing its lawful owners, the world community taking no concrete actions to stop the outrage.