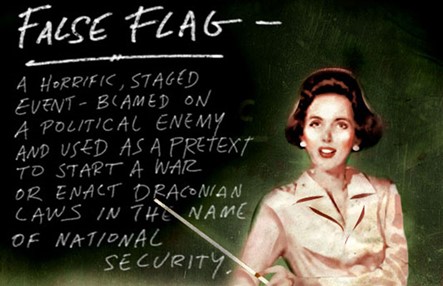 Despite no credible evidence suggesting Iranian responsibility for Thursday's Gulf of Oman attacks or earlier regional ones in May, US establishment side with the Trump regime's Big Lies against the country — what they always do against its adversaries.

They vilified Julian Assange, supporting his prosecution if handed over to Trump regime hardliners for the "crime" of truth-telling journalism the way it should be, ignoring their war on speech, media and academic freedoms, eroding en route to disappearing altogether along with other fundamental rights if strong action isn't taken to halt Washington's tyrannical agenda.

The US and Iran "are on a collision course," the Times added, blaming both sides when clearly the Trump regime is responsible for what's going on, waging war on the Islamic Republic by other means, wanting its legitimate government toppled.

The Times and other US media failed to denounce lawless Trump regime actions against a sovereign state threatening no one, how Washington operates against all nations it doesn't control.

The Times: Iran "continue(s) working to thwart American objectives in Syria, Iraq and elsewhere across the region."

Fact: Tehran is involved in aiding its Syrian ally combat US created and supported terrorists, what US and other Western media fail to explain, blaming imperial victims for US high crimes of war and against humanity committed against them.

The Times called for "American and allied intelligence agencies (to) thoroughly investigate the tanker attacks."

What's needed is an independent investigation excluding US involvement — though getting it may be impossible because of US pressure to blame Iran for what no evidence suggests it was responsible for.

Separately, the Times' resident neocon extremist Bret Stephens headlined "The Pirates of Tehran" in an opinion piece, saying "(i)f Iran won't change its behavior, we should sink its navy," adding:

"(T)he evidence against Iran (for the Gulf of Oman attacks) is compelling" — despite no credible evidence suggesting its responsible for a false flag incident with likely US and maybe Israeli fingerprints all over it.

Maybe Stephens has launching WW III in mind, drawing Russia and China into a conflict — where things are likely heading if US rage for global dominance isn't strongly contested by the world community.

The neocon/CIA house organ Washington Post said "Trump has backed himself into a dangerous corner on Iran," adding: "(I)t appears likely that Tehran was responsible for the attack and for another strike against ships in the Gulf of Oman last month" — ignoring no credible evidence suggesting Iranian responsibility for any aggressive actions.

Not according to WaPo, falsely accusing the Islamic Republic of "aggression across the Middle East, against which the United States ought to push back" — getting things backwards, falsely blaming Tehran for hostile US regional actions, notably post-9/11.

Calling Iran a "dangerous threat to the United States" is a bald-faced Big Lie about a nation threatening no one. The US threatens world peace and societies safe and fit to live in — what establishment media never explain.

Pushing for war, hawkish Wall Street Journal editors lied, saying "(i)t is almost certainly true that Iran is behind the attacks, which makes it all the more important that the West unite in opposition to Iran's aggression," adding:

"(O)nly a nation with a sophisticated military could carry out" the attacks, falsely claiming Iran "sen(t) the world a message: Pressure the US to lift the sanctions or there will be more of this, and worse, to disrupt oil shipments in the Gulf."

A previous article explained that more than any other nations, the US and Israel have the means, motive and opportunity to carry out sophisticated aggressive actions against nations and targets of convenience.

Their history of aggression is well documented. In contrast, Iran is the Middle East's leading proponent of peace and stability, at war with no nations, threatening none.

No Iranian aggression exists now or earlier, what the US and its imperial partners are responsible for against one nation after another it doesn't control, wanting  them transformed into vassal states.

US history of false flag attacks is well documented. The Gulf of Oman and weeks earlier regional incidents have US fingerprints all over them, maybe Israeli ones as well.

No evidence whatever suggests Iranian responsibility for what happened. Trump regime hardliners, their Israeli, Saudi, and UAE counterparts are pushing things toward war on Iran.

It's the world community's responsibility to prevent things from going this far — what would embroil the region more than already and risk possible global war if Russia and/or China get involved to contest US aggression against Iranian sovereignty.