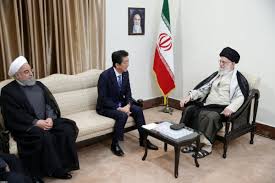 Sinzo Abe is the first Japanese prime minister to visit Iran since its 1979 revolution — ending a generation of US-installed fascist dictatorship.

Japan remains occupied by US forces since WW II ended. According to US Forces Japan (USFJ), about 54,000 US army, navy, air force, and marine corps military personnel are stationed in the country — despite no regional or other threats to its security.

About half of US military personnel are in Okinawa, the country's Puerto Rico, its poorest prefecture, dominated by America's presence under conditions no responsible government would tolerate.

Japan is a virtual US colony, Abe a loyal subject, increasingly militarizing the country in deference to US demands, its post-war era of pacifism over.

Abe unjustifiably justifies his hawkishness over nonexistent Chinese and North Korean threats, nations at war with no others, threatening none, wanting peace and cooperative relations with other countries.

His militarism and alliance with Washington's imperial agenda raise regional concerns. Given his hawkishness, what is he doing in Tehran on an alleged mission to build Middle East peace and stability — especially at a time when endless US wars rage with no prospect for resolution any time soon.

He claimed his mission aims to avoid an "accidental conflict" because of heightened US/Iran tensions.

AFP quoted him saying it's "essential that Iran plays a constructive role in building solid peace and stability in the Middle East" — ignoring its anti-war agenda.

Before leaving for Tehran from Tokyo, Abe said "(a)mid concerns over growing tension in the Middle East and with the attention of the international community on the issue, Japan wishes to do its best toward peace and stability in the region," adding:

"Based on traditional friendly ties between Japan and Iran, I would like to have candid exchanges of opinions" with President Rouhani and Ayatollah Khamenei "toward easing tensions."

A good beginning would be by indicating no change in bilateral political, economic, and trade relations, especially continuation of Japanese purchases of Iranian oil.

The problem between the US and Iran lies in Washington, not Tehran. That's not something Abe can do anything about and he knows it.

Defusing Trump regime-created tensions requires him stepping back from the brink that won't happen given longstanding US rage for regime change.

DJT, Pompeo, Bolton, and their hardline underlings are militantly hostile toward Iran. Unlawfully withdrawing from the JCPOA nuclear deal in May 2018 was a shot across the bow for escalating war on the country by other means, notably by illegal sanctions and warning other nations against maintaining normal bilateral trade relations.

Iran's Islamic Republic News Agency (IRNA) quoted President Hassan Rouhani, saying "(w)e have never started a war against any country, but we will firmly respond to any aggressor" — the universally recognized right of self-defense affirmed under international law.

Abe said he carried this message from Trump. Khamenei responded saying "(w)e have no doubts about your goodwill and seriousness, but regarding what you quoted from the US president, I personally do not consider Trump worthy of exchanging any messages with, and do not have and will not have any response for him," adding:

"Iran engaged in talks with the US and the Europeans for some five or six years, and achieved a result. The Americans, however, breached a done deal," showing it can never be trusted.

The US demands other countries bend to its will, sacrificing their sovereign rights to serve its interests.

Iran would only engage with the US diplomatically if it rejoins the JCPOA, rescinds its illegal sanctions, ends its war by other means, and respects Iranian sovereignty.

That hasn't happened for the past 40 years. Even Obama breached the JCPOA nearly straightaway after it was affirmed by Security Council members.

Chances for improved relations with the US while Trump remains in office are virtually nil. Talks if held while his regime holds Iran hostage to its demands won't change a thing.