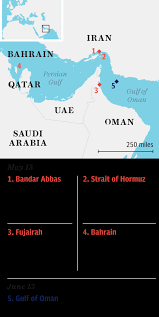 June 13 attack on two oil tankers in the Gulf of Oman off the Iranian and UAE coasts is eerily reminiscent of the US-staged August 1964 Gulf of Tonkin false flag incident.

It launched over a decade of US Southeast Asia aggression, responsible for catastrophic destruction and millions of lives lost before it ended in April 1975.

If Trump regime hardliners have something similar in mind toward Iran, things would be just as devastating or worse to the nation, its people and region.

Establishment media support US rage toward Iran, their propaganda machine pushing for possible war against all nations on the US target list for regime change.

The risk of US aggression against the Islamic Republic is greater than any previous time. Instead of countering hostile Trump regime rhetoric to step back from the brink, establishment media pile on their own.

Iran is falsely blamed for threatening US and Israeli interests, polar opposite reality in the region.

The NYT falsely accused Tehran of having a latent nuclear weapons program it might revive. No such program exists. No evidence suggests otherwise.

Establishment media are all over the Thursday Gulf of Oman incident discussed in a same day article. Suggesting but not blaming the Islamic Republic for what happened, the NYT said "Iran, on the northern side of the Persian Gulf and the Gulf of Oman, has long been at odds with its adversaries and neighbors to the south, Saudi Arabia and the United Arab Emirates."

Polar opposite is true, these Gulf States hostile toward Iran, along with the US, NATO and Israel.

The neocon/CIA house organ Washington Post barely stopped short of blaming Iran for what it clearly had nothing to do with, saying:

"The latest incident in the region comes after the US alleged that Iran used mines to attack four oil tankers off the nearby Emirati port of Fujairah last month."

A Wall Street Journal report on the Gulf of Oman incident was similar, saying "(t)ensions  remain high between the US and Iran following an attack on four vessels in the region last month," adding:

"Washington has accused Iran of attacking four ships in the Gulf of Oman last month, an incident that further strained relations in the region as the White House has displayed a show of military force to deter Tehran."

Russia's deputy UN envoy Vladimir Safronkov debunked the notion of Iranian involvement. No evidence suggest it. Iran said the Saudis and UAE want it blamed for what it had nothing to do with.

It "occurred simultaneously with the meeting between the Japanese Prime Minister (Abe) and the Leader of the Islamic Revolution (at a time when it's important) to reduce tensions in the region."

"Reported attacks on Japan-related tankers occurred while PM @AbeShinzo was meeting with Ayatollah @khamenei_ir for extensive and friendly talks."

Following today's incident, an Iranian rescue vessel was first on the scene, rescuing crew members of both affected vessels, providing assistance, and transporting them ashore to safety.

Instead of praising its efforts, Trump regime hardliners will likely blame Iran for what it had nothing to do with.

The incident has the earmarks of a US-staged false flag, similar to what it's done numerous times before since the mid-19th century, 9/11 the mother of them all.