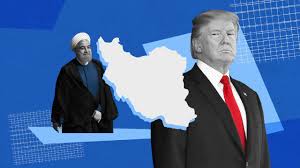 Longstanding US policy calls for toppling Iran's sovereign independent government. Israel has been pushing for it for decades, wanting the US to eliminate its main regional rival.

No "Iranian aggression" exists now or earlier, no Iranian threat to any other countries. US weapons sales to the region are for offense, not defense, notably to Israel, the Saudis, and other Middle East despotic states.

Supplying them to their ruling authorities violates the US Foreign Assistance Act (FAA). It prohibits aiding regimes involved in flagrant human rights abuses.

Washington's key allies are lawbreakers, partnering in its wars of aggression and abusing their own people.

US regional "partners require reassurance (of) American demonstration of resolve." The Trump regime "took steps to deter war, not to bring it closer" — a bald-faced Big Lie. Polar opposite is true.

Claiming "an emergency exists which requires the immediate sale" of weapons, munitions, "logistics services, unmanned intelligence, surveillance and reconnaissance platforms, training, and advisory services" to the Saudis, UAE and Jordan is all about risking confrontation with Iran.

Cooper lied claiming "(t)hese sales and the associated emergency certification are intended to address the military need of our partners in the face of an urgent regional threat posed by Iran" when none exists.

He lied accusing Tehran of "clear, provocative, and damaging actions" when none occurred — a US/NATO/Israeli/Saudi/UAE specialty, not how the Islamic Republic operates.

He lied repeating the long ago debunked Big Lie claim about Iran being "malign actor and the leading state sponsor of terrorism" — how the US and its imperial partners operate, not the Islamic Republic throughout its 40-year history.

Claiming an "Iranian threat…to our partners in the Gulf and to US equities in the region and beyond (is) well-known" again turned truth on its head.

So is falsely accusing Iran of "attack(ing) commercial shipping of the (UAE) coast (along with Saudi) pumping stations" when no attacks by Tehran occurred.

For good measure, Cooper blamed Iran for rocket fire near the US embassy in Baghdad in May it had nothing to do with.

Claiming these non-issues "mark a new evolution in the threat Iran poses to the security of the hundreds of thousands of Americans who live and work in the Gulf States (sic), and to the security of the region, and our partners (sic)" suggests Trump regime hardliners are upping the stakes for possible war on the Islamic Republic, madness if launched, what cool-headed Pentagon commanders oppose.

Separately by memorandum to Congress, Pompeo lied accusing Iran of "pos(ing) a fundamental threat to the stability of the Middle East and to American security at home and abroad (sic)."

He lied claiming "Iran's actions have led directly to the deaths of over 600 US military personnel in Iraq (sic), untold suffering in Syria (sic), and significant threats to Israeli security (sic)."

He lied saying "current threat reporting indicates Iran engages in preparations for further malign activities throughout the Middle East region (sic), including potential targeting of US and allied military forces in the region (sic)."

The US is the world's leading aggressor state. NATO, Israel, and other rogue states are complicit by allying with its endless wars on nations threatening no one.

Cooper vilified Russia and China at the same time, falsely accusing both countries of "trying to disrupt our partnerships by seeking to replace the United States as the credible supplier of choice (sic)," adding:

"When our adversaries sell weapons of war, they do not place the same, if any, premium that we do (sic) on addressing the risk that the capabilities we provide may contribute to abuses of human rights or violations of international humanitarian law (sic)."

No nation in world history has been more contemptuous of the rights of other people than the US.

Endless wars of aggression, other hostile actions against nations, and millions of corpses attest to its barbarity.

Russia, China, and Iran are at peace with other nations, at war with none. The US wages endless wars on humanity at home and abroad.

It risks possible nuclear war to achieve its hegemonic aims. Its rage for dominion over planet earth, its resources, and populations is the greatest threat to world peace, stability and humanity's survival.

The self-styled indispensable state may kill us all by going where no nation ever went before, destroying all life forms because of its rage to dominate by brute force.