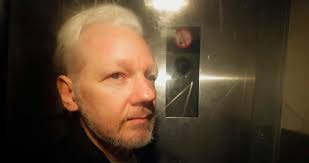 According to editor-in-chief of WikiLeaks Kristinn Hrafnsson:

The Trump regime "is so desperate to build its case against WikiLeaks publisher Julian Assange that it is using a diagnosed sociopath, a convicted conman and sex criminal, who was exposed by the highest levels of the Icelandic government as an FBI informant and who was involved in an entrapment operation in 2011 against Julian Assange."

Trump's Justice Department is "preparing to file (an) additional indictment against Assange" on top of current phony charges, wanting him punished for the "crime" of truth-telling journalism the way it should be.

Despite guilty of no crimes, he currently faces 18 spurious charges, the Trump regime wanting him imprisoned longterm.

Arresting and imprisoning him in the UK was all about holding him for extradition to the US — his mistreatment an assault on fundamental speech, media and academic freedoms, Britain and hardliners in Washington want eliminated.

The Trump regime got Chelsea Manning indefinitely detained for refusing to help build a stronger case against Assange.

According to WikiLeaks, its hardliners intend using convicted felon/FBI informant Sigurdur Thordarson as a witness against him.

He's already considered guilty by accusation multiple times over, conviction on multiple counts certain if subjected to US kangaroo court injustice — the way Chelsea Manning and other courageous whistleblowers were framed.

According to Dutch public broadcaster NOS, FBI agent Megan Brown in charge of Assange's crucifixion went to Reykjavik, Iceland in early May with Eastern District of Virginia prosecutor Kellen Dwyer.

Aided by Icelandic police, they interrogated Thordarson. On May 27, he was flown to Washington for further interrogation, remaining until June 1.

According to WikiLeaks, he agreed to help build a case against Assange. He's now free after earlier imprisonment on charges of embezzlement, fraud, and sex crimes against nine minors.

He "stole tens of thousands of dollars from WikiLeaks, and impersonated Julian Assange in order to carry out the embezzlement," Hrafnsson explained, adding:

"As part of (his) criminal prosecution…in Iceland, he was examined by a forensic psychiatrist who diagnosed him as a sociopath."

Because he lacks credibility as a convicted felon for his grand theft against WikiLeaks, impersonating Assange, along with involvement an FBI plot to entrap him, his identity and fellow agency informant Hector Monsegut will be concealed during UK extradition proceedings against Assange to begin in June 14.

Reportedly in 2011, eight or nine FBI agents and Eastern District of Virginia prosecutors were expelled by Icelandic authorities for unacceptable activities in the country against Assange.

Yet its authorities cooperated with the Trump regime to help frame him for the "crime" of journalism.

According to Sydney Morning Herald reporter Ryan Gallagher, "Thordarson gave the FBI a large amount of data on WikiLeaks, including private chat message logs, photographs, and contact details of volunteers, activists, and journalists affiliated with the organization."

Reportedly one or more other WikiLeaks staffers may be charged by Trump's Justice Department. According to a US Attorney's Office letter to former WikiLeaks spokesman Daniel Domscheit-Berg, he was offered immunity from prosecution in return for fully cooperating with the DOJ, the offer later withdrawn.

In response to 18 current charges against Assange, Law Professor Jack Goldsmith said the work of Assange and WikiLeaks is no different from other media.

Attorney Jacques Semmelman, specializing in extradition cases, said the following about Assange's indictment and request for UK authorities to hand him over to the US for prosecution:

"It is a classic political offense. I have a difficult time seeing a British court departing so significantly from legal tradition and saying in this case they will make an exception," adding:

"The political offense exception as it has existed for probably 150 years has consistently maintained that for espionage charges, they are not extraditable. That's just a classic principle of international extradition law."

Assange's health is another issue. UN special rapporteur on torture Nils Melzer visited him at London's high-security Belmarsh prison. Two medical experts in the effects of torture and other forms of abuse accompanied him.

After a thorough physical and psychological examination, they concluded that years of involuntary confinement in Ecuador's London embassy, compounded by imprisonment at Belmarsh, took an enormous toll on his health.

Trump regime hardliners want him for a politicized show trial, guilt automatic before beginning, a warning to other investigative journalists that the same fate awaits them if they reveal information about US high crimes and other wrongdoing it wants suppressed.