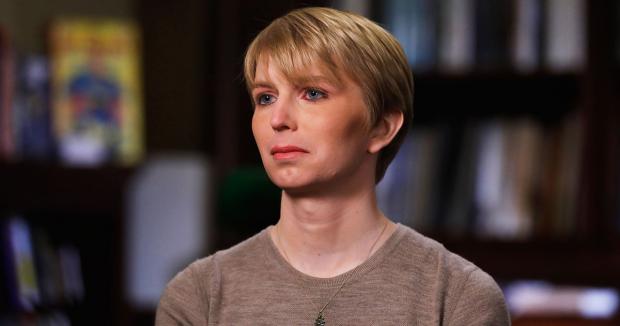 Manning's release from unjustifiable imprisonment for 63 days over her constitutional right to remain silent was short-lived.

The Trump regime wants her behind bars indefinitely, the same true for Julian Assange and others like them.

Its actions, supported by kangaroo federal courts, are all about wanting hard truths about US high crimes of war and against humanity suppressed.

It's about punishing courageous whistleblowers and investigative journalists for revealing them — how all police states operate.

Along with reimprisoning her, he ordered her fined as explained below. In March, she was jailed for refusing to testify against Assange, what subpoenaing her before a grand jury was and remains all about.

Ahead of her reimprisonment Thursday, she said "(t)he government cannot build a prison bad enough, cannot create a system worse than the idea that I would ever change my principles," adding she'd "rather starve to death" than testify.

Last weekend, she said the following:

"Two months ago, the federal government summoned me before a grand jury in the Eastern District of Virginia."

"As a general principle, I object to grand juries. Prosecutors run (them) behind closed doors and in secret, without a judge (or legal counsel) present."

"Therefore, I declined to cooperate or answer any questions" — her constitutional right denied for acting responsibly.

"Based on my refusal to answer questions, District Court Judge Hilton ordered me held in contempt until the grand jury ended."

"Yesterday, the grand jury expired, and I left the Alexandria Detention Center. Throughout this ordeal, an incredible spring of solidarity and love boiled over."

"I received thousands of letters, including dozens to hundreds of them a day. This means the world to me, and keeps me going."

"Jail and prisons exist as a dark stain on our society, with more people confined in the US than anywhere else in the world."

"During my time, I spent 28 days in solitary confinement — a traumatic experience I already endured for a year in prison before."

"Only a few months before re-incarceration, I received gender confirmation surgery. This left my body vulnerable to injury and infection, leading to possible complications that I am now seeking treatment for."

"My absence severely hampers both my public and private life. The law requires that civil contempt only be used to coerce witnesses to testify."

"As I cannot be coerced, it instead exists as an additional punishment on top of the seven years I served" unjustly.

"Last week, I hand wrote a statement outlining the fact I will never agree to testify before this or any other grand jury."

"Several of my closest family, friends and colleagues supported this fact. Our statements were filed in court. The government knows I can't be coerced."

"When I arrive at the courthouse this coming Thursday, what happened last time will occur again. I will not cooperate with this or any other grand jury."

"Throughout the last decade, I accepted full responsibility for my actions. Facing jail again this week does not change this fact."

"The prosecutors deliberately place me in an impossible situation: I either go to jail, or turn my back on my principles."

"The truth is, the government can construct no prison worse than to betray my conscience or my principles."

"Today, Chelsea Manning was remanded into federal custody, again, for refusing to testify before a federal grand jury."

"While coercive financial penalties are commonly assessed against corporate witnesses, which cannot be jailed for contempt, it is far more less usual to see them used against a human witness."

"In a sealed hearing, Judge Anthony Trenga heard arguments that this post-indictment subpoena should be quashed as an impermissible effort to compel Chelsea to participate in trial preparation, which is beyond the scope of the grand jury's investigative function."

"Judge Trenga also heard arguments on whether Chelsea was subject to unlawful electronic surveillance, ultimately declining either to demand from the government further assurances on the matter, or to quash the subpoena."

"Prior to being held in contempt, Ms. Manning was heard in open court on her objections to the grand jury as a secret process that runs counter to her values."

"Today's hearings took place exactly one week after her release, following 63 days of confinement, 28 days of which she spent in solitary confinement conditions, for refusal to testify before a separate Grand Jury that sought answers to identical questions that were asked of her today."

"The motions and transcripts may be partially unsealed following review and redaction by the parties and the Court."

Manning is again behind bars, likely for the duration of the grand jury she was unjustly subpoenaed to testify before.

The kangaroo US grand jury system is unconstitutional, but in Police State America it persists. Manning's First, Fourth, Fifth, Sixth, and Eight Amendment rights were violated.

A former New York Court of Appeals chief judge once said under the US grand jury system, prosecutors control what jurors hear. Their manipulative practices can "indict a ham sandwich."

The Supreme Court earlier ruled that federal grand jury prosecutors need not adhere to customary trial rules and procedures. Nor must they reveal evidence exculpating defendants.

Instead of protecting the public from oppressive government, they function as an oppressive police state tool.

Prosecutors control everything, manipulating procedures for outcomes they seek. Witnesses risk unwitting self-incrimination, even when guilty of no crimes, denied their Fifth Amendment right to remain silent in cases where prosecutors impose immunity – yet able to game the system to their advantage if wanting a witness indicted.

That's why Manning refused to cooperate, invoking her constitutional rights to remain silent, wanting to be free from possible self-incrimination, along with potentially helping the prosecutor build a case against Julian Assange.

She's again jailed as a political prisoner indefinitely, what oppressive rule is all about, countless thousands of other Americans mistreated the same way, victims of police state viciousness.

It's how the US is run by both extremist right wings of its war party.