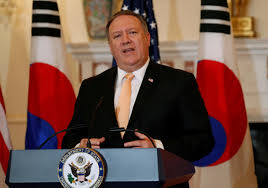 Pompeo in Brussels will likely warn his EU counterparts that the Trump regime's relationship with their countries depends on backing its hostility toward Iran.

Last week he turned truth on its head, claiming Tehran and/or its allies intend attacking US regional forces — a bald-faced Big Lie.

The Islamic Republic never attacked another country. Not a shred of credible evidence suggests it's planning an attack now — a US/NATO/Israeli specialty, not how Iran operates.

On Monday in Brussels, Pompeo is meeting with his French, German and UK counterparts, along with EU foreign policy chief Federica Mogherini, discussion focusing on Iran.

Last week, Tehran gave JCPOA signatories Britain, France, and Germany 60 days to fulfill their pledged commitments, what they failed to do for the past year since Trump illegally withdrew from the binding international agreement.

Its patience worn thin, Tehran announced a partial JCPOA pullback, short of withdrawing from the deal —  relating to enrichment and storage of uranium and heavy water, it legal right under articles 26 and 36, a statement adding:

"Iran stands ready to continue its consultations with the remaining parties to the deal at all levels, but it will swiftly and firmly react to any irresponsible measure, including returning the case (of Iran's legal nuclear program) to the Security Council or imposing more sanctions."

As a result, the Islamic Republic's only option is to "reduce its commitments" under the JCPOA. According to Foreign Minister Mohammad Javad Zarif, Iran's action is "an opportunity for other parties to the deal to take required measures, and not just issue (meaningless) statements."

Pompeo in Brussels will surely pressure his EU counterparts to reject its 60-day demand, pushing them to back Trump regime hostility toward Iran over adhering to JCPOA provisions.

Ideally he'd like Britain, France, and Germany to withdraw from the deal if Tehran follows through on partially pulling back from its commitments as announced, its legal right under its provisions.

For the past year after Trump's pullout, they consistently failed to follow through on their rhetorical promises with constructive policy measures, forcing Iran to push the envelope by its May 8 announcement.

Instead of challenging Trump's unacceptable hostility toward Iran, risking possible war, the EU backs what demands denunciation by inaction — delaying and equivocating for the past year, showing no signs of changing its posture toward the Islamic Republic.

Iranian Foreign Minister Zarif slammed Brussels, tweeting: "(T)he US has bullied Europe—and rest of world—for a year and (the) EU can only express 'regret,' " adding:

"Instead of demanding that Iran unilaterally abide by a multilateral accord, (the) EU should uphold obligations - incl(uding) normalization of economic ties" — according to binding JCPOA provisions Brussels breached for the past year by inaction.

If the bloc fails to fulfill its obligations ahead, Tehran will partially withdraw from the JCPOA "step-by-step," Deputy Foreign Minister for Political Affairs Abbas Araqchi said, adding:

"We have not left the JCPOA so far…No country can accuse Iran of breaching or leaving the nuclear deal."

The Trump regime withdrew last May. Mogherini on Monday saying "(w)e will continue to support (the JCPOA) as much as we can with all our instruments and all our political will" is meaningless hollow rhetoric, EU actions not backing it.

The EU sides with the Trump regime's illegal actions against the Islamic Republic by failing to challenge them.

Note: Following talks in Brussels today on Iran, Pompeo will meet with Vladimir Putin and Sergey Lavrov in Sochi on Tuesday.

Discussion will likely focus on Iran, Venezuela, Syria, and perhaps other issues — progress not likely made toward resolving irreconcilable differences like countless times before.

They plotted to undermine the JCPOA after agreement was reached on the deal by its signatories on July 14, 2015 and adoption by Security Council Resolution 2231 days later on July 20.

Nearly three years before Trump's pullout, these figures plotted to sabotage it — where things now stand.