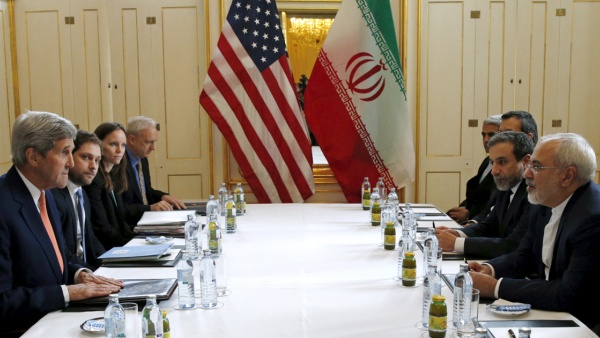 Do EU Nations Side with the US Over Iran?

As long as the US was onboard, Iran nuclear deal signatories Britain, France, and Germany supported its implementation and provisions — no longer after Trump's withdrawal.

Their rhetoric says one thing, their actions another. In response to Iran giving EU JCPOA signatories 60 days to fulfill their pledged commitments to the deal, a joint statement by their leaders May, Macron and Merkel said the following:

"Together, we emphasize our continuing commitment to the JCPOA. This agreement remains important for our shared security."

"We urge all sides to remain committed to its full implementation and to act in a spirit of responsibility."

Expressing "regret and concern" over the Trump regime's pullout, the leaders failed to denounce the unlawful move.

Nor did they refuse to go along with illegal US sanctions or affirm that normal diplomatic, economic, financial, and trade relations with Iran will continue — with them and other EU countries, their obligation under JCPOA provisions.

Iran's patience wore thin. Its Wednesday announced partial pullback from its JCPOA commitments came after waiting a full year in vain for EU signatories to fulfill their obligations under the deal.

Their leaders "encourage(d) Iran to show restraint," what it's done for the past year and continues doing.

"Iran must continue to meet its…obligations under the deal," they stressed — despite the Trump regime's pullout and their failure to fulfill their own commitments.

Saying they'll continue to pursue normal relations with Iran is belied by their actions doing the opposite.

"We have not left the JCPOA so far, but we have put such a move on our agenda and that would happen step-by-step" unless EU signatories fulfill their commitments, what they failed to do so far.

If Britain, France and Germany continue to delay, equivocate, and fail to fulfill their obligations, Iran will no longer feel obligated to remain committed to the deal's provisions.

If Iran, Russia and China alone adhere fully to them, not EU signatories after the Trump regime's pullout, the deal is effectively null and void. Maintaining enforcement requires full compliance.

Iranian Foreign Minister Mohammad Javad Zarif said his government will partially suspend its JCPOA commitments if EU signatories fail to fulfill their own in 60 days, "especially in the banking and oil sectors," he stressed.

"We reject any ultimatums and we will assess Iran's compliance on the basis of Iran's performance regarding its nuclear-related commitments under the JCPOA and the NPT (Treaty on the Non-Proliferation of Nuclear Weapons)," adding:

"In this respect, we recall the key role of IAEA (International Atomic Energy Agency) monitoring and verification of the implementation by Iran of its nuclear-related commitments."

"We strongly urge Iran to continue to implement its commitments under the JCPOA in full as it has done until now and to refrain from any escalatory steps."

The statement said nothing about failure of EU signatories to fulfill their JCPOA obligations — why Iran made its Wednesday announcement, suspending some of its voluntary commitments, relating to enrichment and storage of uranium and heavy water, its legal right under articles 26 and 36 of the deal, saying:

It's ready to engage cooperatively with EU nations to ensure full mutual compliance with JCPOA provisions — "seek(ing) to bring the deal back on track."

On Thursday, Atomic Energy Organization of Iran (AEOI) spokesman Behrouz Kamalvandi said Tehran reserves the legal right to "totally or partially" suspend its commitment if other signatories fail to uphold its provisions, adding:

His government's goal is for full compliance with JCPOA provisions by all its signatories. Trump pulled out. EU countries failed to uphold their end of the deal.

He falsely blamed Iran for US war in Yemen, begun by Bush/Cheney, continued by Obama, greatly escalated by the Trump regime in cahoots with the Saudis and UAE, NATO countries and Israel involved.

He called China "a new kind of challenge," a nation contesting US economic supremacy, surpassing it on a purchase-price basis, what a basket of goods costs in both countries, on track toward likely surpassing the US on a GDP basis years from now, what Washington wants prevented.

He falsely accused China of "want(ing) to divide Western alliances through bits and bytes, not bullets and bombs."

He and other Trump regime officials are pressuring EU countries against granting Chinese tech giant Huawei access to their 5G networks, falsely claiming it'll help Beijing spy on them.

He slammed Iran, repeating the long ago discredited US litany of Big Lies about its government. "I urge the United Kingdom to stand with us to rein in (Tehran's) bloodletting and lawlessness (sic), not soothe the ayatollahs, angry at our decision to pull out of a nuclear deal," he roared.

Separately, he warned that the special US/UK relationship depends on Britain fully backing the Trump regime against Iran.

He lied saying intelligence (received from Israel's Mossad) indicated that Iranian forces or its proxies intend targeting US regional troops.

Acting US war secretary Patrick Shanahan turned truth on its head, claiming the Islamic Republic poses "a credible threat" to US regional forces and interests.

Iran seeks cooperative relations with other countries, threatening none. The Islamic Republic and Venezuela are on the US target list for regime change.

Will the Trump regime attack one or both countries? What's unlikely is possible, waging either direct or proxy war — with likely congressional support if DJT goes this far.