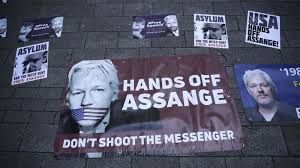 On April 11, Assange was illegally arrested, forcibly dragged from Ecuador's London embassy where he was given asylum by former President Rafael Correa in August 2012.

He's held under draconian solitary confinement conditions at London's high-security Belmarsh prison, Britain's Gitmo - ahead of extraditing him to the US for the "crime" of journalism the way it's supposed to be.

According to his father John Shipton, Assange was "in crushing isolation for his last 18 months" in the Ecuadorian embassy," enduring psychological torture.

Ahead of his arrest, he asked Australian Prime Minister Scott Morrison to bring his son home, arguing it was "time for Australia to step up diplomatic efforts" on his behalf, adding:

"The WikiLeaks library contains three million cables for the United States - an unsurpassed library of what shaped the 21st Century…how the geopolitical world is put together, composed and disposed. That is a considerable achievement."

Assange's publication of US wrongdoing got him targeted for arrest, brutalizing mistreatment, prosecution, and likely longterm imprisonment in the US — on multiple charges, not just what's been revealed. See below.

UK authorities arrested and detained him solely for extradition to the US. DOJ spokeswoman Nicole Oxman acknowledged it, saying "I can confirm that Julian Assange was arrested in relation to a provisional extradition request from the United States of America."

The Trump regime wants him harshly mistreated as a lesson to other investigative journalists - not to go where WikiLeaks dares go repeatedly, what journalism the way it's supposed to be is all about, what establishment media long ago abandoned.

Commenting on Assange's extradition to the US, his father added "I imagine they will hold Julian incommunicado."

"They'll say to the public that Julian said this and that, whatever advances their position politically and legally, and they will do a plea bargain saying you will have 150 years in jail or 40 years if you plead guilty to some crime or another."

"But (I don't lose hope) in the slightest. I haven't had contact with Julian (since his arrest). You can't ring people in Belmarsh maximum security."

'I believe that the last 18 months have been almost crushing, and it's good to see that ending. A good metaphor would be that if you're in a shipwreck you crawl up onto the beach and you're quite relieved to find yourself alive even if you're not quite sure where you are."

The metaphor example is half true. Assange clearly knows where he is and what's coming. From the frying pan to the fire describes his status, the worst yet to come once in US hands.

Accusing him of engaging in a "conspiracy to commit computer intrusion" is utter rubbish. No hacking or other wrongdoing occurred.

WikiLeaks publishes material from reliable sources it believes to be credible, how journalism is supposed to work - a vital public service, not a criminal offense.

On April 20, his mother tweeted the following:

Hes (sic) still not allowed visitors, including his lawyers!

Former Ecuadorian London embassy consul Fidel Narvaez accused Moreno of putting Assange through "hell (by) breaking him down" during his last year in the embassy, adding:

"I was there the first months of the last year and I witnessed" what was going on, imposing punitive restrictions on him.

"The strategy was very clear – break him down. The government didn't know how to end the asylum and face the catastrophic historical shame for doing that."

Moreno invented phony reasons, falsely accusing Assange of using the London embassy for "spying," among other phony pretexts to hand him over to UK authorities after rescinding his Ecuadorian citizenship and asylum.

"Julian had a respectful relationship with staff, diplomats, and administrative staff. I don't recall a single incident when he disrespected someone until I left in July 2018."

"He was 100% respectful. Clean and tidy? What is clean and tidy? Did he put the dishes in the dishwasher? Probably not at weekends. Is that a crime?"

"I consider him my friend. He's provided a big service to all of us. I stand by Julian. I believe him."

It was reminiscent of Britain's infamous centuries earlier Star Chamber, engaged in extrajudicial social and political repression through arbitrary use and abuse of power.

Jailed for journalism is how WikiLeaks editor Kristinn Hrafnsson described Assange's arrest and virtual entombment in London's Belmarsh prison, ahead of handing him to US authorities, adding:

What happened to Assange "is a very dark day, and it sets a precedent that is…very dangerous for journalists, editors, publishers all around the world."

"If you can extradite a journalist to a third country, the United States, for publishing the truth, no journalist can be secure."

"(W)e have Chelsea Manning in prison. We also have Julian Assange in prison. So it's coming to a finale in the saga where a journalist, a publisher, and editor is going to face prison time for doing what journalists are supposed to be doing."

The unsealed charge against Assange "is only the tip of the iceberg. We are absolutely certain that this is only one of the charges that will be brought (against him), and they will be adding on more charges when he arrives" in the US."

Trump regime hardliners declared him guilty by accusation - for the "crime" of truth-telling. So will rubber-stamp judicial proceedings.