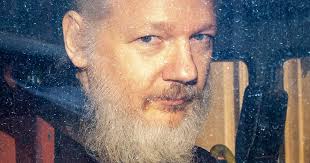 In August 2012, Assange sought and was granted asylum in Ecuador's London embassy (by then-President Correa) to avoid arrest, extradition to Sweden on phony rape and sexual assault charges.

They were all about wanting him handed over to the US to be prosecuted for truth-telling investigative journalism the way it should be - Sweden conspiring with the US and UK for this purpose.

Subsequently, Swedish Public Prosecution director Marianne Ny dropped charges against Assange because they never were valid in the first place.

At the time, his lawyer prematurely declared "total victory," adding "(t)he preliminary investigation has been dropped and the detention order has been withdrawn, and from Sweden's point of view this is now over."

London's Metropolitan Police said a warrant for his arrest remained in force for failing to surrender to authorities on June 29, 2012. Without asylum in Ecuador's embassy, it was executed - extradition to the US sure to follow.

Ecuadorian President Lenin Moreno conspired with the US and UK to rescind Assange's citizenship and asylum status based on Big Lies - selling his soul for whatever favors he was promised.

Former US Attorney General Jeff Sessions called arresting Assange "a priority…(W)e will seek to put some people in jail" for whistleblowing, he blustered.

As CIA director, Mike Pompeo said Assange deserves the death penalty. He turned truth on its head saying "(i)t's time to call out WikiLeaks for what it really is: a non-state hostile intelligence service often abetted by state actors like Russia" - a bald-faced Big Lie, adding:

"We have to recognize that we can no longer allow Assange and his colleagues the latitude to use free speech values against us."

Candidate Trump said "I love WikiLeaks." Calling its site "amazing," he added "I love reading those WikiLeaks." Reportedly he mentioned WikiLeaks over 100 times in the final weeks of his campaign.

He later called Assange "disgraceful," adding he deserves the "death penalty." Following his Thursday arrest, he turned truth on its head, saying "I know nothing about Wikileaks. It's not my thing."

John Bolton once said Edward Snowden "should swing from a tall oak tree." He urged waging cyberwar on WikiLeaks.

Make no mistake. The unprecedented arrest of Assange is what police state injustice is all about. Britain intends handing him over to US authorities to be prosecuted for the "crime" of truth-telling - putting all other independent journalists everywhere at risk.

In the US, First Amendment speech, media and academic freedoms are fast eroding, along with assembly and association rights. Ordinary people have virtually no right "to petition the government for a redress of grievances."

Exposing government wrongdoing is one of the highest forms of patriotism. It involves risking personal harm and welfare for the greater good. It's all about doing the right thing because it matters, because truth-telling on vital issues is its own reward.

When whistleblowers and journalists are criminalized for exposing government wrongdoing on the phony pretext of protecting national security or other fabricated reasons, fundamental freedoms no longer exist.

Orwell said "(i)n a time of universal deceit, telling the truth is a revolutionary act."

Thomas Jefferson once said "(w)hat country can preserve its liberties if their rulers are not warned from time to time that their people preserve the spirit of resistance." He also said free speech "cannot be limited without being lost."

Harry Truman once said "(w)hen even one American – who has done nothing wrong – is forced by fear to shut his mind and close his mouth, then all Americans are in peril."

The ACLU earlier said protecting national security and classified information "cannot be at the expense of a free, open and informed society."

Reporters Committee for Freedom executive director Lucy Dalglish said "(t)he message (authorities) are sending to everyone is: 'You leak to the media, we will get you.' "

"What the hell do they think we are, puppets? They're supposed to stay out of our business. They are the public servants. We pay them."

Waging war on truth-telling journalism the way it should be is more aggressive now than ever in the US and other Western countries, highlighted by Assange's arrest and certain prosecution in the US - likely on espionage charges on top of his current indictment, what got Chelsea Manning sentenced to 35 years imprisonment.

The US honors its worst, persecutes and abuses its best and most honorable - what tyranny is all about.

Today in the US, UK, and other Western societies, fundamental freedoms are fast eroding, replaced by police state rule, tyranny over governance the way it should be.

When governments ill-serve their people, they forfeit their right to rule, civil disobedience an essential tool for change.

There's no alternative to living free and safe. If repressive ruling authorities aren't effectively challenged and replaced by governance serving everyone equitably, we're all doomed.