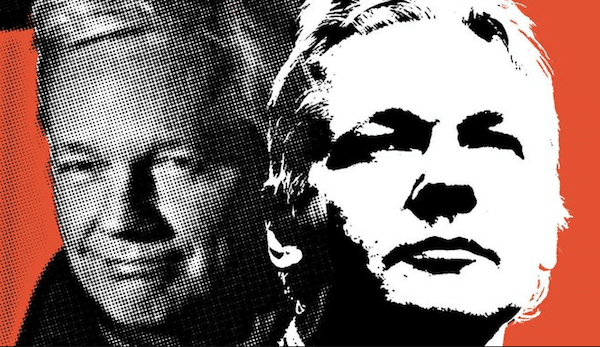 What's going on is a developing story. Events are fast moving. Here's what's known so far.

It's been going on as part of Ecuador's complicity with the US and UK to arrest, detain, and extradite him to US authorities - for the crime of truth telling, journalism the way it's supposed to be.

"We know that there was a request to hand over visitor's logs from the embassy and video recordings from within the security cameras in the embassy," Hrafnsson explained, information to be handed over to Trump regime officials to be used against Assange, she believes.

"He has been taken into custody at a central London police station where he will remain, before being presented before Westminster Magistrates' Court as soon as is possible," adding:

It "had a duty (sic) to execute (an outstanding warrant against him, pertaining to fabricated rape and sexual abuse charges in Sweden later rescinded) on behalf of Westminster Magistrates' Court, and was invited into the embassy by the ambassador, following the Ecuadorian government's withdrawal of asylum."

"I would like to thank Ecuador for its cooperation (sic) and the metropolitan police for its professionalism (sic). No one is above the law (sic)."

Last Friday, Ecuador's Foreign Ministry denied what it called "rumors" about its government's intention to rescind Assange's asylum, expelling him from its London embassy, permitting his arrest by UK authorities ahead of extraditing him to the US.

"In WikiLeaks we have seen evidence of spying, intervention in private conversations on phones, including photos of my bedroom, of what I eat, of how my wife and daughters and friends dance."

The above accusations are groundless. Not a shred of evidence supports them. Assange is a political refugee – granted Ecuadorian citizenship and asylum in the country's London embassy by former President Correa.

Under international law, refugees and asylum seekers are protected. In cahoots with the US and Britain, Moreno ordered Assange expelled in return for whatever favors he was promised.

On Thursday, attorney representing Assange Jen Robinson said UK police arrested Assange for "extradition to the United States for (the crime of) publishing" information everyone has the right to know.

His arrest was "not just for breach of bail conditions (related to phony rape and sexual abuse charges) but also in relation to a US extradition request."

Under international law, torture and similar abuse are forbidden at all times, under all circumstances, with no allowed exceptions.

US viciousness ongoing again against Chelsea Manning and other heroic whistleblowers, for revealing government criminality and other wrongdoing, now awaits Assange once handed over to US authorities - the fate awaiting him.

It's up to ordinary people everywhere valuing peace, equity and justice, wanting to live free from Washington's repressive boot, to resist what's going on against Assange along with other imperial high crimes.

The choice between freedom or fascism is simple – living free or under the yoke of tyrannical rule.

Assange's unlawful arrest is one of many reasons for me to be ashamed to be an American - never beautiful, world's apart from the country I grew up in long ago.