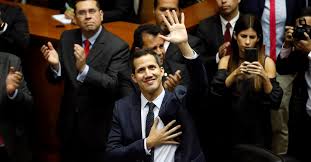 Venezuela is in the eye of the storm, the fate of the hemisphere's leading social democracy at stake, serving all its people - not its privileged few like in the US and other Western countries, fantasy democracies, not the real thing.

On Sunday through Wednesday (Feb. 24 - 27), delegations from 85 countries are participating in an international Peoples' Assembly in Caracas - supporting Bolivarian social democracy, resisting the Trump regime's coup attempt to eliminate it.

National Board of the Landless Rural Workers' Movement (MST) member/Via Campesina International coordinator Joao Pedro Stedile said the assembly is all about showing solidarity with Maduro's government - under attack by the Trump regime and its imperial partners.

"For the last two years, we have been preparing for the assembly and we decided that it be held here in Caracas, on this date, as a form of solidarity from all of the organizations in the world with the government of Nicolas Maduro and with the Venezuelan people," he said.

Spanish delegate Marga Ferre said "(t)he people of Europe do not want a military intervention, and part of what we will debate in the following days is how to build an agenda of solidarity with Venezuela and work on this in Europe. Something we believe in strongly is that every people has the right to be governed how they want."

"It is embarrassing. It is criminal and immoral that the United States – a country where 140 million poor people live, where six million live with hunger daily – comes and tells Venezuela that there is a humanitarian crisis."

"Venezuela has the resistance and the defense of the revolution that permits the redistribution of riches to the most poor, the most dispossessed."

"Venezuela does not have a humanitarian crisis. In Venezuela, there is a struggle in defense of life. The United States cannot say this. Venezuela is an example of the struggle for dignity of all of the peoples of the world and that is why we are here."

A Zambian delegate said "(f)or 500 years the African people have suffered from colonialism and imperialism, and we know what you are suffering now. It is unacceptable that foreign authorities think that the sovereignty of the country does not belong to the people of this country."

Pan-Africanism Federal Movement coordinator Mamadu Djabi Djalo expressed solidarity with the Bolivarian Republic, saying "(w)e will win this fight, and we will do this together. We stand in solidarity with the people of Venezuela in the face of the United States/ pretensions."

On Sunday, Peoples' Assembly delegates were part of "Concert for Peace Against (US) Imperialism in Caracas - held at  the Plaza de los Museos in Bellas Artes, Caracas, attended by thousands.

Note: Billionaire Richard Branson, in cahoots with the Trump regime's coop attempt, held a so-called "Live-Aid" concert on the Colombian side of the Venezuelan border.