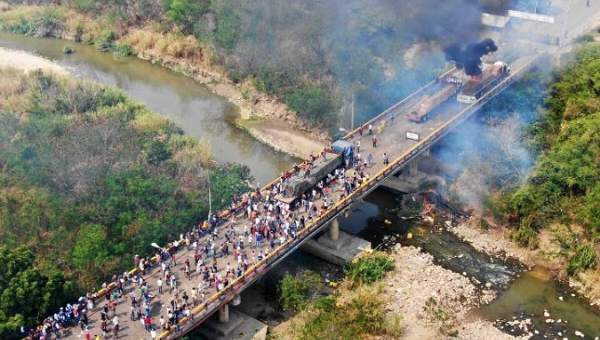 False Flag on the Venezuela/Colombia Border

A previous article suggested a false flag along Venezuela's border with Colombia and/or Brazil was likely - connected to the Trump regime's Trojan horse "humanitarian aid" PR stunt, aiming to provocatively force it cross-border by land and/or by sea.

Venezuelan security forces were deployed along border areas to foil the scheme. President Maduro vowed to prevent its entry into Venezuela - succeeding on Saturday.

He formally severed diplomatic relations with Colombia's narco/fascist regime, giving its staff 24 hours to leave, saying "(m)y patience has run out. We can't keep allowing Colombian territory to be used for attacks against Venezuela."

He denounced its US puppet president Ivan Duque, saying "(y)ou are the devil himself." The same goes for Brazilian despot Jair Bolsonaro. He, Duque, and other fascist regional leaders are in cahoots with the Trump regime's coop plot against the hemisphere's leading democracy.

On Saturday, thousands of Bolivarian supporters rallied in Caracas against the scourge of Yankee imperialism under the slogan: "Hands off Venezuela."

Addressing them, Maduro said "(W)e will fight harder than ever (for our) dignity," adding: "Days will go by. Weeks will go by, and Nicolas Maduro, the worker's president, will continue at the head of the motherland."

Mike Pompeo tweeted: "Cuban agents (sic) are directing attacks on the people of #Venezuela on behalf of Maduro (sic). The Venezuelan military should do its duty, protect the country's citizens, and prevent the Havana puppeteers (sic) from starving hungry children (sic)."

"A broad coalition of democracies (sic) insists that #Venezuela should be free & humanitarian aid (sic) should enter."

"The US will take action against those who oppose the peaceful restoration of democracy (sic) in #Venezuela…We stand in solidarity with those continuing their struggle for freedom (sic)."

For the warmongering Trump regime, its predecessors, and vast majority in Congress: "War Is peace. Freedom is slavery. Ignorance is strength." US Trojan horse "humanitarian aid" is a poisoned chalice.

On Saturday, two of four Trump regime USAID trucks, trying to illegally force entry into Venezuela, were set ablaze on the Colombian side of the Francisco de Paula Santander Bridge, connecting the two countries.

According to eyewitnesses, anti-Bolivarian elements were responsible for torching the trucks with Molotov cocktails - a likely CIA-orchestrated stunt to wrongfully blame government security forces.

On the Venezuelan side of the border, National Guard forces were well away from where the stunt occurred.

According to the International Federation of Red Cross and Red Crescent Societies, "some people not affiliated with (either organization), wearing Red Cross emblems," tried entering Venezuela illegally from Colombia and Brazil.

A second false flag-like stunt on Saturday involved a likely US-orchestrated incident. Three Venezuelan soldiers rammed a border barrier with Colombia in two commandeered vehicles, then entered the neighboring state on foot, another soldier joining them.

Separately, Saturday efforts by the Trump regime to force entry of Trohan horse aid through the Brazilian border and Caribbean Sea were foiled by Venezuelan security forces.

Events on Saturday were planned in Washington well in advance of Saturday - orchestrated in cahoots with the fascist Colombian and Brazilian regimes, along with Venezuelan anti-Bolivarian elements.

The message to these darks forces from Maduro, its military commanders, and millions of Bolivarian supporters is: "Hands off Venezuela!"

The Saturday stunt failed. It remains to be seen what further dirty tricks US dark forces have in mind. Foiled yesterday, their war on democratic Venezuela continues - more illegal toughness sure to come.