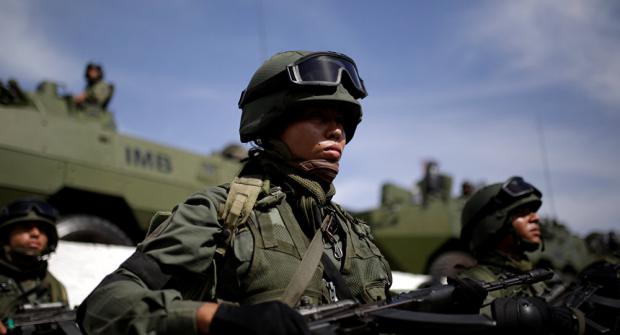 A showdown along Venezuela's borders with Colombia and Brazil began, violence initiated by US proxies.

He vowed to block Trump regime Trojan horse "humanitarian aid," Venezuelan soldiers and police deployed along the country's land and sea borders, defending its security against US hostility by proxies or directly.

On Saturday morning, soldiers reportedly fired tear gas against provocateurs along the border with Colombia.

"Due to the serious and illegal threats attempted by the Government of Colombia against peace and sovereignty in Venezuela, (Maduro) has taken the decision of a total, temporary closure of all bridges that unite both countries in Tachira" state.

Throughout the Bolivarian Republic's history since February 1999, soldiers, police and other security forces haven't acted violently against the Venezuelan people. They respond as needed when hostile elements initiate violence, chaos, and commit vandalism.

"We see theoretically humanitarian assistance being forced into Venezuela without compliance with the most elemental principles required to do so. The Secretary General is watching this closely."

The military has strict order to respond as necessary only when hostile elements initiate violence and other actions, threatening Venezuelan civilians, government forces, and/or national security.

Asked about reported Friday deaths and injuries, he said "(y)our question is full of venom. (It) is poisonous. It is in no way related to the versions (of events) that I have had."

"Members of the Venezuelan military…will never have orders to fire on the civilian population. They are there to defend Venezuelan territory from any armed attack against our country."

Maduro called US Trojan horse aid a pretext for invasion, part of its regime change plot, borders closed and heavily guarded to protect Venezuelans and national security against US hostility.

The situation is fluid and fast-moving, more updates to follow. Border area footage showed anti-government elements hurling rocks at soldiers and police, setting tire ablaze, along with efforts to breach barriers between Venezuela and bordering states.

Security forces are using tear gas against violent US proxies. Saturday is day one of what's likely to worsen ahead before hopefully improving.