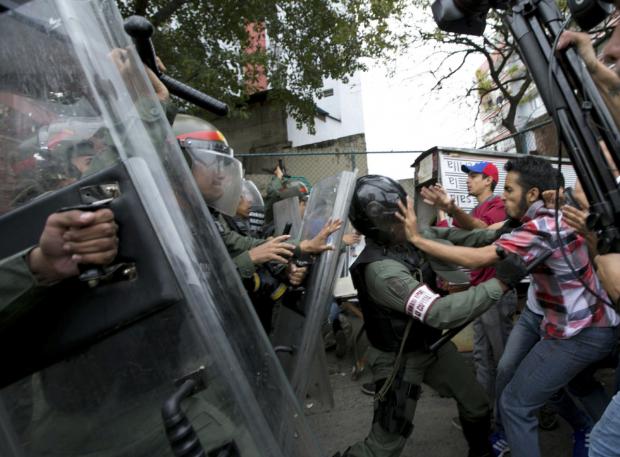 Flashpoint in Venezuela Coming to a Head

Saturday and days following the 23rd are showdown days in Venezuela. At stake is Bolivarian social democratic freedom v. US-imposed fascist tyranny. There's no ambiguity about it.

Their scheme is a pretext for instigating greater violence and chaos in the country on top of ongoing war by other means, a diabolical plot supported by US imperial partners and Western media, complicit with Washington against a sovereign state, flagrantly violating the UN Charter and other rule of law principles.

US war on Venezuela is the main cause of dire economic conditions, harming ordinary Venezuelans, not the country's privileged class or US business interests.

What's planned for Saturday and its aftermath by Trump regime hardliners will begin unfolding in short order. It's up to Venezuelan security forces and world community nations against the scheme to challenge it through action. Rhetoric alone is meaningless.

Maduro closed the country's land and sea borders to prevent it coming in. A confrontation looms, precisely what depends on what Trump regime hardliners planned.

Most likely it'll include US-orchestrated violence instigated by Venezuelan elements allied with the coup plot.

Trump is a pathetic figure, a front man for imperial plots against all sovereign independent states, captive to dark forces controlling him, a war criminal multiple times over - belonging in prison, not high office.

His regime plans unspecified "punitive measures" against Maduro if aid is blocked. Mike Pence and Trump's point man for regime change in Venezuela by coup d'etat Elliott Abrams are in Colombia or heading there to be directly involved in what's planned.

More tough illegal sanctions are likely coming along with whatever interventionist tactics will unfold as scripted.

On Monday, Trump warned Venezuela's military to either abandon Maduro and join his coup plot or suffer unspecified consequences. "You'll lose everything," he bellowed.

Neocon extremist Bolton cancelled a trip to South Korea to lead iron-fisted tactics against Maduro, along with Pompeo and Abrams.

Russia's Foreign Ministry warned that "(a) dangerous large-scale provocation is scheduled for February 23" - connected to Trohan horse "aid," likely intending to try forcing it cross-border into Venezuela, instigating a confrontation with the nation's security forces, a pretext for US "coercive action."

"The cargo is set to arrive in Venezuela in early March through a neighboring country on aircraft flown by an international shipping company," she explained - a CIA operation.

There's nothing "humanitarian" about the Trump regime's scheme. It's all about pushing the coup d'etat envelope closer to US-instigated violence, perhaps by false flag, a longstanding US specialty - aiming to gain another imperial trophy.

The vast majority of Venezuelans will lose social democratic freedoms and benefits if the Trump regime's scheme works - why it's crucial for world community nations against what's going on to challenge and stop it.