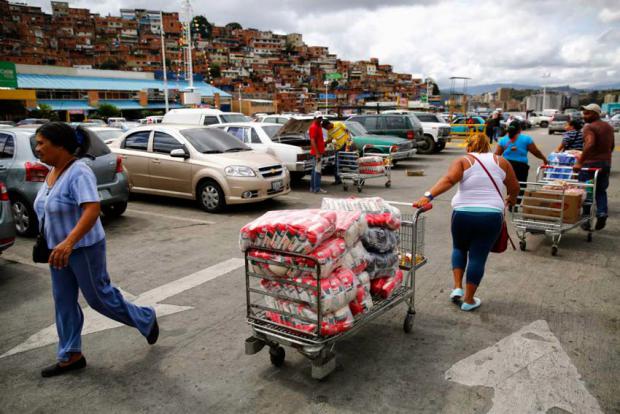 No Empty Grocery Shelves in Venezuela - US Propaganda Rages Otherwise

The alleged dire food shortage in Venezuela is US propaganda rubbish.

Hardships indeed affect millions of Venezuelans, largely because of US war by other means, notably harsh illegal sanctions. More on reality in the country below.

Wars, color revolutions, and old-fashioned coups are built on a foundation of bald-faced Big Lies - drowning out hard truths.

Imperial wars of aggression and coup plots against sovereign states like Venezuela unfold in similar fashion - establishment media-supported propaganda key. Without it, plots would unravel before gaining traction.

Throughout its history, the US glorified wars, color revolutions, and old-fashioned coups in the name of peace and democracy Republicans and undemocratic Dems abhor - pacifism considered unpatriotic, governance of, by, and for everyone equitably prohibited.

Social psychologist Alex Carey helped pioneer the study of corporate propaganda. His seminal work titled "Taking the Risk Out of Democracy: Corporate Propaganda versus Freedom and Liberty" said the following:

In 1917 during WW I, George Creel first used propaganda to manufacture public consent for US involvement. His campaign worked, turning pacifist Americans into raging German-haters.

In 1916, Woodrow Wilson was reelected on a pledge of: "He Kept Us Out of War." Straightaway, he began planning US involvement.

My dad served as a soldier in the war to end all others, thankfully able to come home alive and well after service in France.

In his 1928 book titled "Propaganda," Edward Bernays, a nephew of Sigmund Freud, became a PR/propaganda pioneer, inventing the technique he called "engineering of consent," saying the following:

Mind manipulating propaganda can "regiment (public sentiment) every bit as much as an army regiments their bodies."

"If we understand the mechanism and motives of the group mind, is it not possible to control and regiment the masses according to our will without their knowing about it?"

He and colleague Ivy Lee were described as "professional poisoners of the public mind, exploiters of foolishness, fanaticism and self-interest."

In his book title "The Engineering of Consent (1947), Bernays called the process "the very essence of the democratic process, the freedom to persuade and suggest" - used time and again for ill, not good, especially in selling wars and coups like what's going on in Venezuela.

The process plays out the same or a similar way every time, punctuated by supportive media propaganda. It reared its ugly head ahead of the Trump regime's attempt to force entry into Venezuela cross-border with Trojan horse "aid."

Maduro categorically denied the reports, saying the nation's military does not fire on its people. It protects Venezuelan sovereignty and responds to violence instigated by provocateurs.

A White House statement threatened Maduro and his officials, saying "those who are following his orders will not go unpunished."

The establishment Financial Times reported that "Venezuela's elite restaurants (are) thriving," experiencing no shortage of food for patrons.

Journalist Max Blumenthal visited a Caracas supermarket, finding shelves well stocked with a wide variety of meats, fruits, vegetables, beverages, and most everything else found in the West.

"There isn't an issue here with food distribution or food scarcity. The issue is the buying power of Venezuelans that has been completely destroyed because their currency has been so badly weakened by hyperinflation, speculation, and the flood of dollars that the government can't control here, as well as hoarding by private capitalist elements that support the opposition."

Hardships in Venezuela are largely made in the USA, things likely to worsen as Trump regime hardliners intensify efforts to eliminate the hemisphere's leading democracy.

That's why mass resistance is vital - supported by world community nations on the right side of history, opposing the Trump regime's coup plot, backing their rhetoric with action.