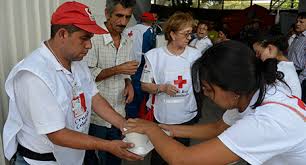 Under international law, humanitarian crises occur in countries where armed conflicts rage or when natural disasters affect entire populations or much of them.

Examples of the latter occur during widespread famines, epidemics, or other emergency conditions affected nations can't handle without outside help, very much not the case in Venezuela - despite US and establishment media propaganda claims otherwise.

The January 2010 earthquake in Haiti is one example of a humanitarian crisis following a natural disaster.

The calamitous event devastated Port-au-Prince and other areas, responsible for extensive destruction and damage - around 300,000 Haitians killed, countless thousands of others injured.

Deeply impoverished and homeless, they endured protracted crushing hardships, losing everything with practically no domestic or foreign aid to help.

Things won't change with his departure. The US won't have things any other way. Appalling conditions persist without relief.

They're the hemisphere's worst, the longstanding fate of millions of Haitians other than when Jean-Bertrand Aristide was president - forcibly deposed twice by the US, intolerant of democratic rule everywhere, especially at home.

Conditions in Haiti and Venezuela are world's apart. By any legal definition or standard, humanitarian crisis conditions in the Bolivarian Republic do not exist.

The term applies to conditions in Afghanistan, Iraq, Syria, Yemen, other US war theaters, Haiti, Somalia, Myanmar, and elsewhere, including in occupied Gaza.

Israel is slowly suffocating its two million residents under brutalizing illegal blockade, imposed solely for political reasons, the Strip an undeclared war zone, the IDF attacking its people by land, sea and air on a regular basis, despite its leadership and people posing no threat.

Whenever and wherever the US intervenes abroad for alleged humanitarian and/or other reasons, mass slaughter, destruction, and human misery follow - true of all its past and current war theaters, as well as in nations targeted by color revolutions and old-fashioned coups.

There's nothing humanitarian about what the Trump regime intends for Venezuela, just the opposite. Its scheme is all about attempted regime change - violently if other tactics fail.

Resistance from ordinary Venezuelans and the nation's military is much more challenging than its plotters imagined - so far successfully contesting the Trump regime's attempt to gain another imperial trophy.

"It's very simple. If you want to help Venezuela, release the billions of dollars in resources that belong to us. So don't come with a cheap show, a show of indignity, of humiliation, where they offer $20m dollars in food that is toxic, and rotten."

At the same time, Trump regime hardliners likely are attempting to arm opposition elements in the country. In early February, assault rifles and related equipment were discovered at Valencia state's Arturo Michelena International Airport – covertly flown in from Miami, likely disguised as humanitarian aid, found at a storage facility.

It's unknown if other arms caches entered the country undiscovered. Perhaps Trojan horse humanitarian aid in Colombia and Brazil includes weapons to stoke violence and chaos - a key reason to block it.

According to the NYT propaganda wurlitizer, "(t)he opposition has vowed to deliver food and medication, but the president has refused to allow it. Patients whose lives depend on aid fear the political standoff is obscuring their desperate crisis."

The self-styled newspaper of record ignored the real crisis - the Trump regime's attempted coup against a democratic government, perhaps intending to incite violence this weekend, wanting it falsely blamed on Venezuela's military, a pretext to escalate violence and chaos.

"It would be a crime against humanity to act against thousands of people who are clamoring for food and medicine. But I'm worried that Nicolás Maduro is looking for a fight."