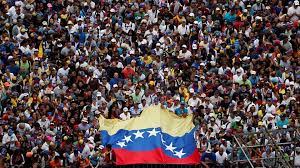 The fate of Venezuela is one of the cutting edge issues of our time. There's no ambiguity about what's going on.

The Trump regime, supported by its colonial allies, saluting and following orders, aims to replace the hemisphere's model social democracy with fascist tyranny if its plot succeeds.

It's crucial to defeat it - for Venezuela and other countries in the US crosshairs for regime change, seeking control over planet earth, its resources and populations, what the scourge of imperialism is all about.

Trump is a front man for sinister dark forces running the US, co-opted straightaway in office to do their bidding, true as well for his predecessors, the way the dirty system works.

The US agenda is hostile to what free societies cherish, serving privileged interests exclusively, exploiting ordinary people everywhere, smashing one sovereign state after another - peace, equity and justice considered abhorrent notions. The same goes for rule of law principles and democratic values.

Countless millions of corpses worldwide attest to America's barbarity, a rogue state like no other, giving pure evil new meaning, humanity's survival up for grabs if it goes too far, an ominous possibility.

Trump is a predatory billionaire businessman caricature of a political leader, an embarrassment to the office he holds, a serial liar perhaps unable to distinguish between facts and fiction because he's so accustomed to turning truth on its head time and again.

On Monday in Miami, he reiterated his undeclared war on Venezuela, its democratic government and people - his Presidents' Day address infected with a litany of Big Lies.

"We're here to proclaim a new day is coming in Latin America. It's coming," he bellowed, adding:

"In Venezuela and across the Western Hemisphere, socialism is dying, and liberty, prosperity, and democracy are being reborn."

Ignoring cold hard truths, he was silent about Venezuelan prosperity before intense US war by other means devastated its economy, causing enormous harm to its people he pretends to support.

The "new day" he's for is cruel, exploitive, destructive fascist tyranny, "prosperity" for the privileged few alone, "democracy" a notion he and most others in Washington want eliminated wherever it exists.

Article 336.7 of Venezuela's Constitution authorizes the Supreme Court to "declare an unconstitutional default in the national, state or municipal legislature…and establish, if necessary, corrective measures" at the court's discretion.

The opposition controlled National Assembly stands in contempt of Venezuelan constitutional law, why its actions have no legal standing, according to the Supreme Court - why Maduro called for new parliamentary elections.

Like most others in Washington, Trump has a disturbing habit of airbrushing out hard truths, conflicting with the ruthless imperial agenda he supports.

He shamefully lauded US-designated puppet/usurper in waiting Guaido's nonexistent "incredible courage" - a dubious figure, trained by Washington for his role, a traitor to his country, the highest of high political crimes.

Trump: "The people of Venezuela are standing for freedom and democracy, and the United States of America is standing right by their side."

Venezuelans overwhelmingly want US dirty hands off their country. Trump's agenda is rapacious, exploitive and lawless - polar opposite what democracy is all about, absent in America, the West, and elsewhere.

Slamming what he called "the horrors of socialism and communism," he ignored the ravages of predatory capitalism, money power exploiting ordinary people.

It impoverished billions worldwide, thirdworldizing America, poverty its leading growth industry, millions in the country a paycheck or two from homelessness, hunger, and despair.

America under Republicans and undemocratic Dems, the war party, is the United States of I don't care about the vast majority of its people.

The vast majority of Americans are included. Powerful interests want social justice eliminated, ruler-serf societies everywhere, nations made unsafe and unfit to live in - the dictatorship of wealth, power and privilege, what the scourge of US imperialism is all about.

Maduro slammed Trump's "infected hand (that's) hurting Venezuela." Its Defense Minister Vladimir Padrino Lopez said if the US tries to install "a puppet" regime, it'll be over "our dead bodies."

Venezuela's armed forces are deployed along its borders to protect against hostile invaders.

The struggle for the fate of the nation continues - to remain free from the scourge of US imperial control.