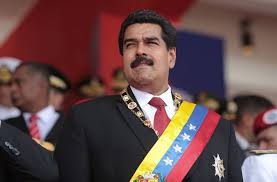 Republicans and undemocratic Dems oppose government of, by, and for everyone equitably at home and abroad, what democracy is supposed to be, what's been absent in America from inception.

Bolivarian social democracy in Venezuela has been targeted for elimination since Hugo Chavez's 1998 election, serving as president from 1999 until poisoned to death by the Obama regime in 2013.

Multiple surgeries and world-class medical care couldn't save him, a tragic loss for Venezuelans and freedom-loving people everywhere.

Since Nicolas Maduro was elected and reelected Venezuelan president, last May overwhelmingly, Republicans and undemocratic Dems plotted his removal.

That's what is going on now, Trump regime hardliners wanting fascist tyranny replacing social democracy in Venezuela by whatever it takes to achieve their aim.

All of the above are bald-faced Big Lies, along with falsely accusing Maduro's government of human rights abuses - a US specialty, not how the Bolivarian Republic operates.

Months of earlier street protests were made in the USA, not Caracas. Accusations of "arbitrary arrests (and) extrajudicial killings" are Big Lies.

So was falsely claiming Maduro "criminalized criticism of the government," and anti-government demonstrations were "peaceful" - polar opposite reality.

It omitted explaining that dire economic conditions in the country were made in the USA, including illegal sanctions and other ruthless toughness against a sovereign state threatening no others.

It gave feature op-ed space to National Assembly (AN) head Juan Guaido. He invoked a constitutional provision that permits transferring power to the AN if the presidency becomes vacant, very much not the case.

What's going on suggests he's part of a Trump regime coup plot to topple Maduro, promoting himself as an interim president with "support of the armed forces, the people and the international community."

He headlined his coup-supporting op-ed "Maduro is a usurper" - a Big Lie. "It's time to restore democracy in Venezuela" - meaning fascist tyranny masquerading as rule of the people.

Is Guaido Washington's designated puppet? Are plans afoot to oust Maduro, Guaido chosen to replace him?

The Trump regime likely wrote his op-ed. Saying "(w)e have a government that has dismantled the state and kidnapped all institutions to manipulate them at will" is a bald-faced Big Lie.

A falsified narrative continued, turning truth on its head, saying "(t)hey have attacked the foundations of a democratic system…(T)oday we are left with a usurper occupying the presidency."

"(W)e didn't have an election," calling governance under Maduro a "dictatorship (with likely) ties to drug trafficking and guerrilla groups…"

All of the above are made-in-the-USA Big Lies. More of the same followed, Guaido's op-ed a Mein Kampf-type recitation, promoting himself as a US-supported tinpot despot to replace Maduro, pretending to be democratic, saying:

"…I am fully able and willing to assume the office of the presidency on an interim basis to call for free and fair elections" - a coup d'etat call to arms, pretending otherwise, endorsed by the CIA-connected WaPo.

There you have it. What's coming remains to unfold - perhaps an attempt to forcibly topple the hemisphere's most vibrant democracy, Washington gaining another imperial trophy if the scheme works, Venezuelans subjugated to its will.

US major media support the scheme, notably the NYT, WaPo, and the Wall Street Journal, falsely calling Maduro "illegitimate," backing the notion of Guaido replacing him - to transition from democratic rule to US-controlled fascist tyranny while claiming the opposite.