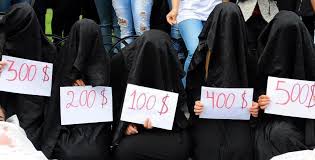 Washington created and controls ISIS. CIA operatives and US forces trained them in the art of committing gruesome atrocities.

They include beheadings, use of chemical and other banned weapons, mass slaughtering civilians, taking countless numbers captives, women brutalized as sex slaves.

In 2014, 20-year-old Nadia Murad was abducted along with thousands of others Yazidi women and girls in northern Iraq.

Forced into sex slavery, they endured virtual daily rapes and other abuses. A miraculous survivor, Murad documented the horrors she endured in a memoir, titled "The Last Girl: My Story of Captivity, and My Fight Against the Islamic State."

She and countless others endured sexual violence from the moment of their captivity, repeatedly raped as sex slaves.

Murad said she was raped and beaten daily. Once after a foiled escape attempt, she was gang-raped by six ISIS terrorists for punishment, as well as subjected to further abuse by other ISIS members.

"You don't know who will open the door next to attack you, just that it will happen and that tomorrow might be worse," she said.

Escaping when alone after her captors' left their house door unlocked, a family smuggled her out of ISIS territory, taking refuge in a northern Iraq refugee camp.

"I want to be the last girl in the world with a story like mine," she wrote in her book.

Ashwaq Haji Hamid is another former ISIS sex slave, held captive as a teenager in Iraq. Thinking she was safe in Germany after escaping, she discovered otherwise - encountering the ISIS terrorist responsible for abducting her into sex slavery for weeks.

"I ran away from Iraq so I would not see that ugly face and forget anything that reminds me of it, but I was shocked to see him in Germany," she said.

"The first time was in 2016. He was chasing me. He was the same person, but the second time, he came close to me and told me he knew everything about me."

"If I had not seen him, I would have stayed in Germany. I wanted to complete my studies and get a degree that would give me a decent life."

The man she encountered in Germany was known as Abu Humam. In 2015, he bought Ashwaq at a slave market for $100 - now living free in Germany instead of held accountable for his high crimes.

The Merkel regime partners with US imperial wars and Washington's support for ISIS.

Ashwaq lived with her extended family in Iraqi Kurdistan. "The worst time in my life was the moment when ISIS separated us from our families. I knew that I would be raped and tortured," she said - aged-15 at the time of her captivity.

"I tried my best to convince (Abu Human) that he should release me," she added. "But he said that he got orders that they should rape all Yazidi women and keep them as slaves."

"We even tried looking for gasoline or anything sharp, like knives or scissors, to kill ourselves with, but didn't find anything."

After managing to escape, she said "(w)e knew that if we stayed they would kill us, because they are ISIS and they are murderers."

After encountering Abu Humam, she returned to be with relatives in Iraq, saying:

"My dignity is more important than being in Germany. I've put my life on the edge to escape from ISIS here to keep my dignity, then you want me to stay in Germany and know that the one who was responsible for my misery is free in that country?"

"All I wanted was to be somewhere safe but if I meet ISIS there and I'm afraid all the time that he would hurt me again, then I can't stay there anymore."

Nadia, Ashwak and millions of other Iraqis, Syrians, Libyans, and Afghans are victims of US imperial ruthlessness.