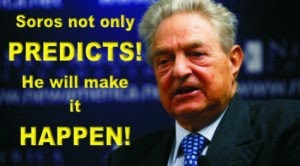 It seems inconceivable that a sovereign state would change its name to please one or more other nations.

It's by no means certain, requiring parliamentary and national referendum approval not easily gotten.

Tiny Macedonia, population around 2.1 million, was earlier part of Yugoslavia before US-led Balkan wars raped and destroyed the country, partitioning it for easier control.

The NYT shamefully published his disgraceful op-ed, written jointly with his son Alexander - turning truth on its head, claiming by changing the country's name from the Former Yugoslav Republic of Macedonia (FYROM) to the Republic of Northern Macedonia, Balkan and European stability will be enhanced. Just the opposite if true.

Bilateral leadership agreement to the name change didn't come easily. A generation of talks with Greece preceded it. Soros and his son called it "a mistake to dismiss (the name change) as a minor development."

He's right for the wrong reasons. He lied claiming the change "soften(s) a rivalry over national histories, opens a window of opportunity for leaders in Europe and the United States to defy current trends and begin shaping a secure future for the Balkans, an achievement that would help secure stability for all of Europe."

Dissolution of Soviet Russia over a generation ago was hugely disruptive. A new era of world peace failed to materialize, just the opposite.

Former Russian republics Estonia, Latvia, and Lithuania are NATO members. So are other Eastern European ones, including Albania, Bulgaria, Croatia, the Czech Republic, Hungary, Poland, Romania and Slovenia - tiny Montenegro the latest country pressured to join.

Washington wants all remaining Eastern European nations co-opted to be part of NATO, including Ukraine and Georgia, both countries bordering Russia, their inclusion in the US-dominated alliance a red line for the Kremlin.

Neither country threatens America - or any others. Provocatively positioning strategic weapons where they can easily and quickly strike their heartlands shows Washington's real intent.

All sovereign independent governments are targeted for regime change by any means including war.

Soros promotes having all European nations included in US-dominated NATO and the EU, including tiny renamed Macedonia, whether or not the name change is approved.

He's militantly Russophobic, supporting whatever harms its interests. Dismantling NATO and the EU would be major steps toward achieving European and global peace and stability - not the other way around with more nations joining these alliances, giving Washington greater control over them.

Earlier, he was also chief correspondent for the Greek news agency ANA in Moscow (1989-99).

Writing on Macedonia's name change, he headlined "This is also a coup! The second one in Greece after 2015," saying:

Examination of the name change agreement shows "instead of solving" years of disagreement between the FYROM an Greece, it "perpetuates the existing differences between Greeks and Macedonian Slavs," adding:

"The main aim of the Agreement is to open the way for FYROM to join NATO and then, the differences of the two nations will be used to provide the US with a permanent tool to use the one nation against the other."

"The Agreement was conceived to facilitate US-NATO advanced strategic planning for controlling the Balkans by encircling, containing and threatening Russia."

"The Agreement has also the potential of destabilizing and provoking much greater instability, conflicts and chaos in the region, including in Greece itself."

"In addition to the problems outlined above concerning the Greek side, there are also doubts whether (Macedonian PM Zoran) Zaev himself, who came into power in 2016, as a result of a 'color revolution' greatly helped by US Secret Services, has also sufficient legitimization to sign this Agreement."

Konstantakopoulos calls what's going on "a series of 'legal' coups d'etat and flagrant violations of the most elementary democratic and parliamentarian rules and procedures."