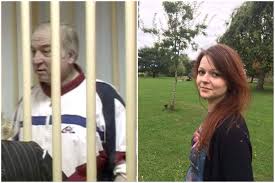 Are the Spripals Held Against Their Will in Britain?

Britain and Washington bear full responsibility for whatever harmed them - clearly not a military-grade nerve agent, as falsely claimed.

He called Salisbury Hospital where the Skripals are being treated a "secret rendition center for Yulia Skripal," stressing:

Chief hospital administrator Cara Charles-Barks hasn't explained if it obtained consent forms signed by the Skripals after they regained consciousness.

Without them, claims about respecting their privacy "are improper, according to the practice rules of the British National Health Service, and unlawful violations of their human rights, according to British and European law," Helmer explained.

If attending physician to the Skripals Dr. Christine Blanshard falsified Yulia's comments, or failed to get consent forms from both Skripals, she and the hospital administrator "can be called to account…in court," Helmer added.

Yulia, and likely Sergey, are conscious able to speak. Yet they're being held incommunicado - except for one brief monitored conversation between Yulia and her cousin Viktoria Skripal in Moscow.

British law requires hospitals treating patients to be accountable to their next of kin. For the Skripals, it's Viktoria. Yet she was denied visa permission to visit her ill relatives for unacceptable reasons.

According to Helmer, "evidence now accumulating is that the hospital is detaining and isolating the Skripals against their will, preventing contact with their family."

Viktoria shares the same view, believing Yulia was told what to say during their brief conversation. She's not able to speak freely or see anyone she chooses.

Her cell phone was disconnected, her call to Viktoria made on what she called a "temporary telephone."

In a BBC translation, Yulia said "(e)verything is OK." Her father Sergey is "all right." He's conscious and "resting…no one will give you a visa," said in response to Viktoria saying she'd come to Salisbury to see them, adding in a disturbing way indicating her comments were monitored:

"That's the situation at the moment. We'll sort it out later…Later, we'll get it sorted later. Everything's fine. We'll see later."

"Everything's fine, but we'll see how it goes. We'll decide later. You know what the situation is here. Everything is fine. Everything is solvable. Everyone is recovering and is alive."

Is that how cousins speak to each other by phone or in person when one is ill, the other concerned about her health and well-being?

When people are hospitalized, visits from relatives are important to their well-being. Yulia is prevented from freely speaking publicly. Russia was denied consular access to her.

Viktoria was denied visa permission to visit her and Sergey.

According to Article 36 of a still valid 1968 Soviet Russia/UK treaty, "(a) consular officer shall be entitled…to communicate with, interview and advise a national…and may render…every assistance," including aid and legal advice.

"No restriction shall be placed by the receiving State upon the access (to) a national…or (any) communication" obstruction.

The treaty also allows the Russian embassy to designate Viktoria or another party to represent the hospitalized Skripals, required to let them meet unhindered.

Yet Salisbury hospital imposed a communication shutdown, clearly on orders from Whitehall and/or metropolitan police, the Skripals unable to communicate freely with anyone they choose.

The following statement attributed to Yulia makes no sense, allegedly saying "I hope that you'll respect my privacy and that of my family during the period of my convalescence."

Viktoria is family. Why is she prevented from communicating freely with Yulia through her cell phone?

Helmer: "Salisbury Hospital is in violation of British and international law. If this isn't taken to court, it stinks."

Indeed so! It's unclear how strongly Russia is pushing this issue other than what's been publicly reported.

If its citizens are being harmed, otherwise mistreated, or denied their rights, it's Russia's obligation to do everything possible to aid them in every way.

On Tuesday, the BBC and other UK media reported Yulia Skripal was discharged from Salisbury hospital. Dr. Christine Blanshard said her father Sergey's strength is "growing daily," hopefully able to leave the hospital "in due course."

It's unclear where Yulia is, reportedly taken to a secure location. Russia's embassy "congratulate(d) (Yulia) on her recovery," adding: "(W)e need urgent proof that what is being done to her is done on her own free will."