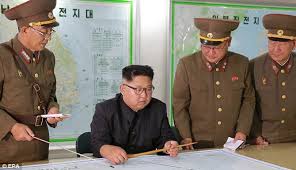 US policy has been unchanged since WW II - notably today in bipartisan hawkish/neocon-infested Washington.

On Monday, South Korean officials led by the country's National Security Office head Chung Eui-yong and Vice Unification Minister Kim Sang-gyun held talks with DPRK leader Kim Jong-un and other North Korean officials in Pyongyang for the first time since he assumed power in 2011 - day one of a two-day visit.

It's the first high-level talks between both countries in over a decade. North Korea's KCNA news agency said a summit between Kim Jong-un and Moon Jae-in was agreed on to be held in April - no further details provided.

On Monday, officials from both countries agreed on continuing the thawed spirit of national reconciliation begun during the February Winter Games.

Both countries want peace, not war, Washington's imperial agenda the obstacle, including enormous pressure on Moon not to deviate from longstanding US policy, wanting adversarial relations maintained with Pyongyang, not reconciliation and recognition of its sovereignty.

On Tuesday, North Korea's Chung said "(t)he North made clear its willingness for the denuclearization of the Korean peninsula, and made clear that there is no reason to own nuclear (programs) if military threats towards the North are cleared and the security of its government is guaranteed."

A hotline between both countries will be established, both leaders to speak by phone before meeting for the first time in April.

The problem with following through on denuclearization is Washington's threatening posture toward Pyongyang, its provocative military exercises with South Korea and Japan the DPRK considers rehearsals for war, its longstanding history of targeting sovereign independent nations for regime change, and its history of reneging on treaties, conventions and other deals agreed on.

Every US president from Truman to Trump has been hostile toward the DPRK, none more threatening than the current administration.

It's why Pyongyang is justifiably reluctant to deal with Washington. History clearly shows US administrations can never be trusted.

They consistently promise one thing, do then another. Betraying negotiating partners is longstanding longstanding US policy.