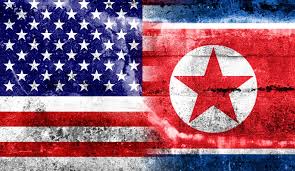 Pyongyang shuns them because Washington lacks good faith, promising one thing, doing another, betraying the DPRK before.

In 1994, US/North Korean talks were held. An Agreed Framework was signed.

Pyongyang agreed to freeze and replace its nuclear power plant program with a light water nuclear reactor, along with steps toward normalizing relations with Washington.

The Clinton administration agreed to build two light-water reactors by 2003. In the interim, it would supply Pyongyang with 500,000 tons of heavy fuel annually.

US sanctions would be lifted. The DPRK would be removed from the State Department's state sponsors of terrorism list. Both countries agreed to provide "formal assurances" against threatened or actual use of nuclear weapons.

Pyongyang agreed to allow Washington to monitor its nuclear sites. It upheld its part of the deal. It collapsed after GW Bush called North Korea part of an axis of evil in his first State of the Union address, breaching it unilaterally.

US administrations consistently betray sovereign independent countries, why Washington can never be trusted under GOP or undemocratic Dem leadership. Rare exceptions prove the rule, none since the Soviet Union dissolved in 1991.

Heading home from South Korea, Mike Pence said US pressure will continue on Pyongyang leadership until it agrees to denuclearization, adding:

"(M)aximum pressure (will) intensify. But if you want to talk, we'll talk" - with a gun pointed at its head?

No nation would accept this type offer, a hostile ultimatum, not responsible outreach, an insult to what diplomacy is supposed to be all about, both sides seeking accommodation to settle disputes fairly.

Pence's so-called offer was no "step in the right direction," as RT International suggested.

It was an offensive slap in the face, demanding Pyongyang agree to US demands, expressing willingness to meet its officials face-to-face under these unacceptable conditions.

DPRK leadership is too savvy to accept them. Building trust requires earning it, a lesson Washington hasn't learned, forcing its will on other nations - permanently at war to get its way, its agenda making more enemies than friends.

Pyongyang's nuclear and ballistic missile programs are pursued as deterrents against feared US aggression.

They won't be suspended without ironclad assurances of peace, an end to provocative US military exercises simulating war on the DPRK, lifting hostile sanctions, along with recognizing and respecting its sovereign independence.

On Saturday before heading home, Pence said Washington will "continue to isolate North Korea economically and diplomatically until they abandon their nuclear and ballistic missile program."

On Monday from Cairo, Tillerson disagreed with Pence, saying it's "too early" for talks with Pyongyang, adding:

"We've said for some time it's really up to the North Koreans to decide when they're ready to engage with us in a sincere way, a meaningful way."

"They know what has to be on the table for conversations," claiming it's first important "to determine whether the parties are in fact ready to engage in something that's meaningful."